Creating Community through the Arts 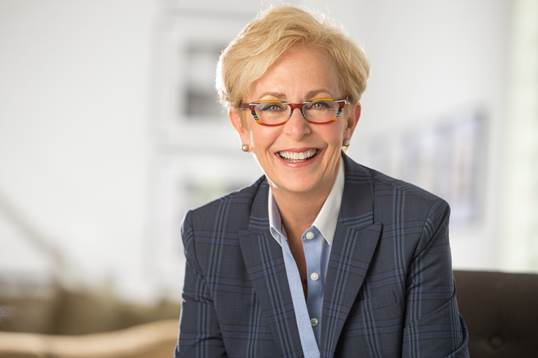 Creating Community through the Arts October 28, 2019

Gina Vernaci had spent nearly four decades as a theater manager and administrator and was in the middle of a highly successful tenure at Cleveland’s Playhouse Square when a lunchtime walk changed her educational and professional path.

“I walked by Cleveland State’s Levin College of Urban Affairs building, which is a block away from my office at Playhouse Square, and found myself wondering what urban affairs meant,” she says. “I walked in to find out and realized how important the field was to the work I did every day in building a broader arts community for the region. Shortly thereafter, I applied to the Master’s in Urban Studies program.”

Vernaci would ultimately graduate from CSU with her Master’s Degree in 2003 and credits the education and training she received as a key factor in her continued career advancement, which culminated in July of 2019 with her appointment as President and Chief Executive Officer of Playhouse Square. In that role, she manages all business and operational aspects for the largest performing arts center in America outside of New York. This includes overseeing community development projects, education initiatives and the presentation of over 1,000 events annually that draw in more than 1 million visitors from across the region and beyond.

“Knowing how cities work and how people operate within them has been pivotal to being a good leader for this organization which, in addition to presenting performances, is actively involved in downtown development,” Vernaci adds. “I use my CSU degree literally every day.”

Vernaci first joined Playhouse Square in 1984 and has watched the organization and the neighborhood it calls home transform before her eyes. Over the years she has served as program manager, director of programming, vice president, senior VP, executive producer and president and COO. In those positions she has managed nearly every aspect of operations and played a leading role in organizational partnerships and programming development that have made Playhouse Square one of the top arts institutions in the country.

“When I started, the organization was still in its infancy and I did not have a title or a permanent position,” Vernaci notes with a smile. “But I fell in love immediately with the mission and decided I was going to do everything I could to help make Playhouse Square what we all dreamed it could be, a cultural and artistic hub for our city.”

Along the way, Vernaci has partnered multiple times with her alma mater to enhance Playhouse Square’s goals and Cleveland State’s educational mission. This includes helping to activate a collaboration with CSU and Cleveland Play House, which sought to renovate the Allen Theatre and move CSU’s theater, dance and arts programs to Playhouse Square. The restored facility opened in 2011 and now serves as the home for CSU theatrical and dance productions, offering an amazing real-world experience for students and a more direct pipeline to talented theater professionals for Playhouse Square and its partners.

“Cleveland State has been a major leader in the broader effort to enhance investment and development in Downtown Cleveland and the Campus District, for the benefit of the entire region,” she adds. “We could not ask for a better partner.”

Moving forward Vernaci will seek to enhance and expand the many activities happening throughout Playhouse Square and beyond, including summer programming on U.S. Bank Plaza, the Disney Musicals in Schools program, the KeyBank Broadway Series and the Tri-C Jazz Festival, among many others. She will also work with Playhouse Square’s resident organizations, including Cleveland Play House, Great Lakes Theater, DANCECleveland, the Cleveland Ballet and Cleveland State, to further improve the variety and volume of cultural activities being presented. In addition, she will welcome The Lumen to the district, a 34-story apartment tower currently rising above Euclid Avenue, which will add 318 apartments to downtown Cleveland.

“Playhouse Square is a vibrant and powerful downtown district and cultural center and I am very proud and honored to be able to lead its continued growth,” she adds.