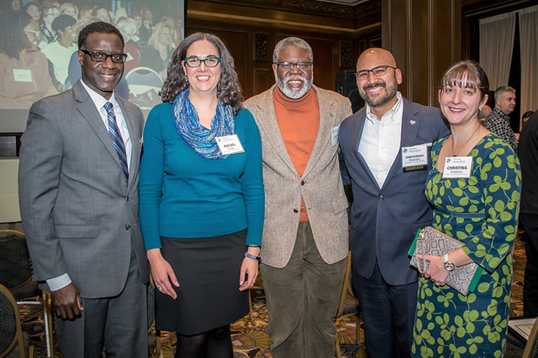 Graduates who are impacting their communities, the world and Cleveland State University in unique and creative ways were honored at the second-annual Alumni Recognition Awards. The event also saluted CSU’s third class of Fascinating Alumni.

“Our alumni – some 126,000 strong – are the foundation of this University and our greatest ambassadors. They bring distinction to CSU and we are proud to honor them,” said Brian Breittholz, assistant vice president for alumni affairs and executive director of the CSU Alumni Association.

Donnetta Monk and Mac Lewis for Student Leadership. Both are juniors in CSU’s Honors College and leaders in the 1964 Society -- Donnetta as president and Mac as pride and traditions manager.

Young Alumni Council for Outstanding Chapter Program -- 5 Under 35 is a panel discussion series that features five panelists under age 35 talking about life after graduation.

Southwest Alumni Team for Outstanding Chapter. Based in Arizona, this group is one of CSU’s most active alumni chapters outside the Cleveland area, even hosting one of the first Homecoming events outside of campus.

Nolan Andersky, BBA ’12, for Outstanding Young Alumni. The digital content manager at Nestle is a member of CSU’s Young Alumni Council and serves as treasurer and director of programming.

Allison Flowers, BS ’01, Kurt Steigerwald, BA ’86 and MBA ’88, and Karen Steigerwald, BSN ’88, for David Balint Outstanding Volunteer Service. Flowers is the longest-serving current member of the Alumni Board of Directors and former president of CSU’s Black Alumni Organization. The Steigerwalds organized a large group of 1980s era alumni to march in CSU’s 50th anniversary homecoming parade. He is a member of the Alumni Board of Directors. She is helping CSU form a nursing alumni chapter.

Laura Rodriguez-Carbone, BA ’11,and Robert Brandt, BBA ’89,and Carla Brandt for the Resilience Award. Rodriguez-Carbone has overcome adversity and today is a community outreach coordinator for Lifebanc. Brandt and his wifecreated Robby’s Voice. Named for their son who struggled with drug addiction and passed away in 2011, the foundation focuses on  bringing drug awareness and education to families, schools and communities in need.

Carrie Neville and Brandon Longmeier for the Presidential Citation for Exemplary Service to the Alumni Association. Both work in CSU’s Athletics department and work with the Alumni Office to create joint athletic/alumni events.

Dr. Andrew Gross for Honorary Lifetime Alumni Association Membership. For 50 years, theprofessor of marketing and international business has been a champion of educational excellence who has impacted thousands of students. He will retire in June.

Congratulations to the third class of Fascinating Alumni:

Gary Sorace, BEd ’78 and MEd ’93. Now retired, he spent 40 years as an educator, including 35 years teaching at-risk students in the Twinsburg schools. He is an inductee in the Ohio chapter of the National Wrestling Hall of Fame.

Roger Stone, BS ’65.He holds a number of patents and spent 26 years with Procter & Gamble as a senior scientist in the cell and molecular biology department, where he was a top investigator of toxic shock syndrome.

Crystal Franklin, MEd ’00. She has visited six continents, was a Peace Corps volunteer in Guyana, and currently teaches science in China. In 2016, she was recognized for her work at a White House-sponsored United State of Women Summit.

Lidia Polatajko Trempe, BA ’02. The “babushka lady” is making ethnic foods and traditions cool again as co-owner (with her mother) of Rudy’s Strudel and Bakery in Parma – known far and wide for its Fat Tuesday paczki parties and events like post-Easter Dyngus Day.

Susan Hlavacek, BEd ’80. Thefirst female inducted into CSU’s Athletic Hall of Fame taught and coached at Laurel School and Notre Dame College, and today is director of events and programs for the National Senior Games Association.

Sandra Banks Robinson, BA ’76. Retired after36 years as a reporter, editor and columnist at the Los Angeles Times, sheis now a Senior Fellow with the Annenberg Center for Communication Leadership and Policy at the University of Southern California.

Radhika Reddy, MACC ’01. Aformer member of the CSU Foundation board of directors, she is the co-founder of Ariel Ventures LLC which includes four other 100 percent women-owned and minority firms.

Alan Wragg, BBA ’66. He spent 16 years in senior sales management roles at Sports Illustrated and Life magazines, was the publisher of the largest cable industry magazine, The Cable Guide, and founded the first electronic guide, Total TV Online. Now retired, he is CEO of the Time Life Alumni Society.

Gary Tucholski, BSME ’63. A career engineer with Eveready Battery Co., he played a key role in the development of numerous battery technologies and product lines and was named a charter member of the Eveready Battery Hall of Fame.