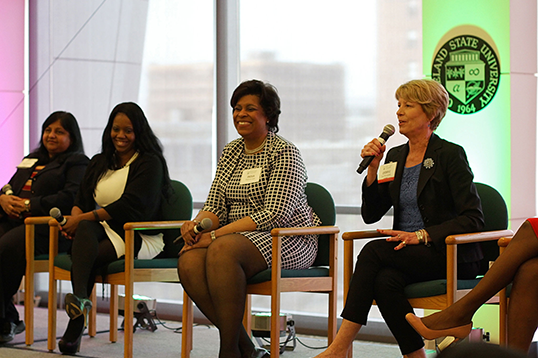 "Last year's Women's Leadership Symposium was so positive, we sold out and left everyone wanting more. So we've lined up more speakers, more panels, more workshops, more time and more space," said Brian Breittholz, assistant vice president, alumni relations, and executive director, CSU Alumni Association. Registration is now open for this inspirational, day-long event set for Wednesday, April 13. Choose morning only, afternoon only, or join us for the day and re-charge your batteries.

Be Amazing… the Second Annual Women’s Leadership Symposium is presented thanks to the collaborative efforts of the CSU Alumni Association and Division of Student Affairs, the OHIO Alumni Association and ohiowomen. The event, which begins at 8 a.m. and concludes at 4 p.m., will be at CSU’s Bert L. & Iris S. Wolstein Center, 2000 Prospect Ave. Participants can attend the morning session, including breakfast; the afternoon session, including lunch; or the entire day. Registration is at womensleadershipevent.org.

“Ohio University students and top-level, women administrators will be in Cleveland to represent the University, and we know OHIO alumnae in Northeast Ohio will come out en masse for the day,” said Jennifer Neubauer, assistant vice president, alumni relations and executive director, OHIO Alumni Association. “As the first woman to lead the OHIO Alumni Association in its nearly 160 year history, I am particularly keen to offer programming that addresses the challenges women face personally and professionally.”

Staff members and alumnae from both universities have been collaborating for months to organize just such programming.

Talton, the morning keynote speaker, is the author of three books, Beyond Extraordinary: A Blueprint to Flourish in Business and in Life; The Currency of Passion; and her newest, Flourish: Have it All Without Losing Yourself. She earned an MBA in finance from CSU and a doctorate in management from Case Western Reserve University’s Weatherhead School of Management, where she has taught as an adjunct instructor of marketing. In addition to her academic pursuits, writing and her work in inspiring others to flourish, Talton is Chief Executive Officer of Synergy Marketing Strategy & Research, Inc., a brand strategy and market research consultancy that helps organizations improve “market share, share of wallet and share of heart.”

Frates is the keynote speaker for the afternoon portion of the symposium. In 2012 her athletic 27-year old son, Pete, was diagnosed with ALS, or Lou Gehrig’s disease. Inspired by her son – who chose to view his disease as an opportunity to do good – Frates and her family launched the now-famous ALS Ice Bucket Challenge, which went viral and has raised some $220 million globally for ALS research. Frates went viral too, as groups across the country began inviting her to speak and inspire. Her TED talk has been viewed nearly 900,000 times.

In addition to these keynotes, the Women’s Leadership Symposium will feature panel discussions and breakout sessions presented by alumni and friends of both universities on topics ranging from online harassment, to LGBTQ rights, women in entrepreneurship, women’s aging and women in salary negotiations. The day will include a career fair for companies and organizations interested in recruiting top female talent and a women’s expo, featuring organizations committed to advancing women’s interests and causes.

Breittholz and Neubauer, assert that alumnae have expressed interest in leadership development and in networking across generations.

“While influential women like German Chancellor Angela Merkel and former Secretary of State Hillary Clinton make headlines daily, women’s overall progress into leadership positions inches along at a slow pace,” Breittholz said. “Only 1 in 10 UN member states and only about 5% of Fortune 500 companies are led by women.”

Through different perspectives, the Women’s Leadership Symposium will explore factors that keep women from advancing at the rate of their male counterparts, while highlighting the attributes that help women succeed in business, government, academia, the arts, sciences, sports, the armed forces and other sectors.

“We believe a collaboration at this level – between two nationally recognized alumni programs – is unprecedented and is reflected in the many high-quality presentations attendees will experience,” Neubauer said.

“I believe all the offerings at the symposium go far past the traditional ‘You go girl’ fare that too many women’s conferences rely upon and will appeal to women who are eager for smart, thought provoking dialogue,” Neubauer said.

The symposium will provide women with opportunities to learn and to network and will encourage students and recent graduates to build bridges with more professionally established CSU and OHIO alumnae.

“Cleveland State and Ohio University both have extraordinary alumnae and students engaged in many vibrant leadership roles in northeast Ohio. We’re delighted to partner with OHIO, and we encourage alumnae from both universities to invite their friends, relatives and co-workers to join them at this symposium,” Breittholz said.