Basketball, burgers and Becky's brought these two together 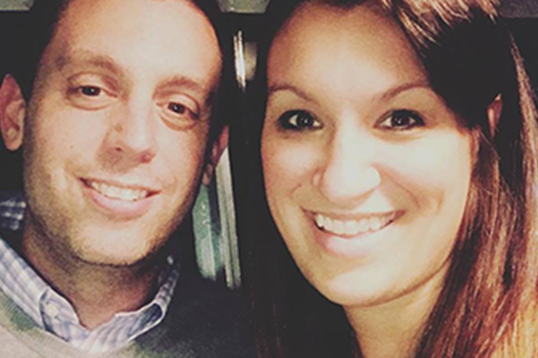 Basketball, burgers and Becky's brought these two together February 14, 2018

Ryan found out Stacey was a woman after his own heart when he took her to CSU men's basketball game and she spent the night calling out plays and heckling the refs. The two won us over and are this year's winners of our Vowed Viking contest.

"After graduating in 2007, I stayed involved on campus, taking grad classes and working at the CSU Recreation Center.

Part of my responsibilities at the Rec center was to check out equipment, such as two-way radios, to staff at the beginning of each shift. In late 2008, while working the opening shift, I noticed a nice new employee named Stacey who was interning on the aquatics side, who always seemed to greet me with a smile and polite conversation.

I finally realized that maybe I should ask her out instead of simply passing her the radio and saying "have a nice day". Like any true Cleveland State Viking, I invited her to join me at the next night’s basketball at the Wolstein Center and maybe a burger and some curly fries at Becky’s after the game.

Luckily for me she said yes, and while watching the game together I quickly realized this girl knew her hoops. She was calling out plays, cheering loudly and even heckling the refs. I instantly became smitten. Although the Vikings lost that game to Butler on a half court buzzer beater, I was somehow able to keep my cool. We had a great time at the game and eventually ended the night with our first of many trips together to Becky's, and we have been inseparable ever since.

Almost ten years later, we're happily married and plan on spending this Valentine's Day celebrating in the most romantic of ways – over a burger and curly fries at Becky's."