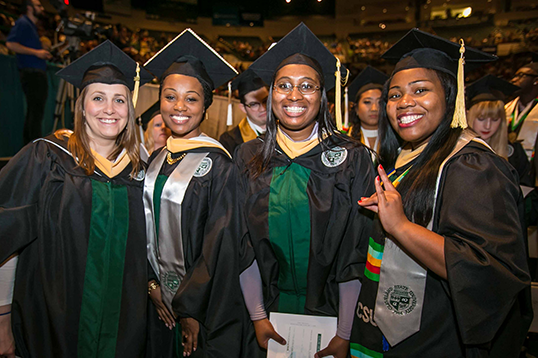 CSU Alumni Association membership jumped by more than 2,200 and beloved urban studies Professor Norman Krumholz was awarded an honorary degree during spring 2016 Commencement exercises the weekend of May 14-15.

The graduates and their families beamed, despite rainy and unseasonably cold temperatures over the weekend. Of more than 2,200 graduation applications filed for spring 2016 semester, 592 were for the College of Sciences and Health Professions; 491 for the College of Liberal Arts and Social Sciences; 349 for the Washkewicz College of Engineering; 325 for the Monte Ahuja College of Business; 265 for the College of Education and Human Services; 133 were for the School of Nursing; 124 for the Maxine Goodman Levin College of Urban Affairs; and 109 for the Cleveland-Marshall College of Law. See our pie chart for the breakdown by college and click here for a terrific series of images and social media posts from Commencement weekend.

Krumholz also published in many professional journals and wrote chapters for several books, and wrote the book, “Making Equity Planning Work: Leadership in the Public Sector” (with John Forester). He was awarded the Cleveland Arts Prize Lifetime Achievement Award for Design in 2007 and is a former president of the American Planning Association. Read a Cleveland Scene interview with Krumholz here.

Also receiving an honorary degree was Robert H. Rawson, Jr., outgoing chairman of the CSU Board of Trustees. Rawson was appointed to the Board of Trustees by Governor Ted Strickland in 2007 and has served the University tirelessly ever since. He has been as a board officer since the year of his appointment; first, as treasurer from 2007‐2008, and the next three years as vice chairman. In June 2011, he was elected chairman.

Rawson served 15 years as partner‐in‐charge of the Cleveland office of Jones Day. Although he stepped down in 2007, he continues as partner. He was the featured speaker at the University’s afternoon graduation ceremony.

CSU grad Andrew Puzder, president and chief executive officer of CKE Restaurants Holdings, Inc., was the 2016 morning commencement speaker. CKE is the parent company of the Carl’s Jr. and Hardee’s fast food franchises, and Puzder is largely credited with transforming CKE into an international conglomerate with nearly 3,700 restaurants in 38 countries with over $4 billion in sales. He earned his bachelor’s degree in history from Cleveland State in 1975. Read more about Puzder here.