In the days of horse-drawn carriages and booming industry, one street in Cleveland showcased the elite among the city's citizens. Millionaire's Row, a length of Euclid Avenue, was where prominent figures such as John D. Rockefeller, Marcus Hanna and Charles F. Brush built their mansions. The largest among them was built for Samuel Mather, chairman of Pickands, Mather & Company, one of the four largest shippers of iron ore in the country. He held the position of officer or director for over two dozen iron, banking and transportation corporations. For years, Mather was among the richest citizens in Cleveland and contributed more than $8 million to community-based organizations.

The 45-room Mather Mansion, completed in 1910, at the time was the most expensive home in Cleveland and was the largest home ever built on the street. It was among the street's most luxurious mansions, with handcrafted stone, brick and woodwork and a third-floor ballroom with a 16-foot ceiling and the capacity to easily hold 300 guests. Mather Mansion's scale and opulence reflected its owner's attempt to arrest the declining desirability of Millionaire's Row as commercial and industrial buildings encroached. Mather commissioned Charles Schweinfurth, who had previously designed the Rockefeller Park Bridges and at least 12 homes on the street, to design the mansion. Mather was already a supporter of Schweinfurth's work, having given the architect $1 million to cover the cost of building nearby Trinity Cathedral.

As the commercial district of Cleveland pressed further down Euclid Avenue, the elaborate homes began to lose their grandeur in the wake of skyscrapers and large retail stores, and Mather's home proved to be the last built on the storied street. Between 1923 and 1951, many of the homes on Millionaire's Row were demolished to make way for parking lots and commercial buildings. In the mid-1950s, the homes between Mather Mansion and East 30th Street were demolished to make way for the Innerbelt Freeway. Even more homes were torn down in the following decades to accommodate the expansion of Cleveland State University's campus.

Yet, lying just out of the way of the interstate highway and at some distance from the core of CSU's emerging campus, Mather Mansion survived. Upon Samuel Mather's death in 1931, the residence passed to the Cleveland Institute of Music, and in 1940 the property was transferred to the Cleveland Automobile Club (an affiliate of AAA). In 1967, Cleveland State University acquired and renovated Mather Mansion, and six years later the house became one of the first Cleveland buildings to be listed on the National Register of Historic Places. By 1975, Mather Mansion was among only seven remaining Millionaire Row's homes, allowing a rare glimpse of the magnificence that once dominated Euclid Avenue. In 2009-10, it served as the temporary home of the University's History and Philosophy departments.

In 2014, the university abandoned plans to renovate the Tudor mansion into a boutique hotel and instead allocated $2.7 million to renovate the mansion into the new home for the Center for International Services and Programs, a program to teach English as a second language, and the Cleveland State University Alumni Association. 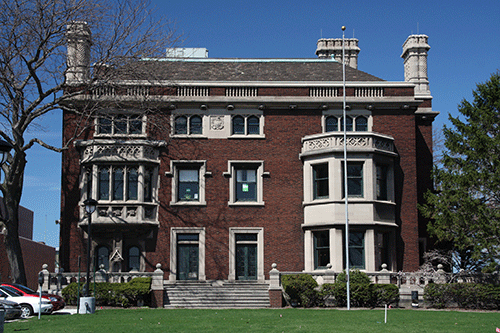