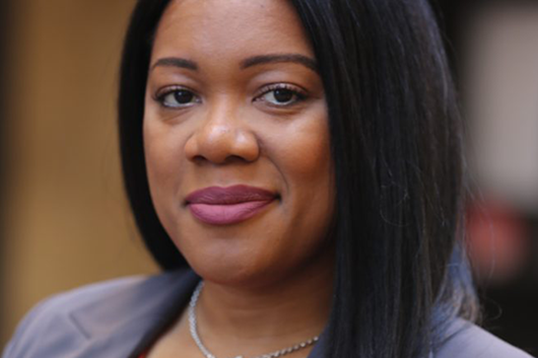 The 2020 presidential election might be over, but graduate Kayla Griffin's work as state director of All Voting is Local is just beginning.

In November 2020, more than 67 percent of eligible Ohio voters cast their ballots in the presidential election. For many, this accomplishment required jumping through a few hoops. Some had trouble even applying for or turning in their ballots, and others faced harassment and intimidation at the polls or issues that resulted in not being able to vote at all.

As Ohio state director of All Voting is Local, Kayla Griffin (JD ’14, MPA ’16) works to remove voting barriers throughout the state. With the recent election now over, Griffin remains focused on ensuring voters can have their voices heard by encouraging the state to increase the number of ballot boxes, improve curbside voting, implement Automatic Voter Registration and avoid unnecessary voter purging.

In August, Secretary of State Frank LaRose released a directive limiting dropboxes to one per county. Even though before the primaries not every county had one, Griffin stresses that one box is not enough in larger counties.

This issue was especially prevalent because so many voters didn’t trust or have the means to pay to return their ballots via mail.

“Our state legislature would not approve the secretary of state to pay for return ballots. From our analysis, it is a modern-day poll tax to require people to pay money to engage in the electoral process.”

In Ohio, anyone can use curbside voting, and All Voting is Local advised in-person voters to do so due to the pandemic.

“Throughout the state, there were so many holes in curbside voting,” said Griffin. “There were traffic backups and lines flooding out of the election center onto the street because there was no infrastructure to manage it. There were people waiting in line for hours trying to get access to the ballot from their cars.

“Hopefully in 2021 we can help shore that up and put some policies in place on the local level.”

Griffin would like to see Ohio implement Automatic Voter Registration, something other states have been doing for years.

Today, when you go to the BMV, they ask if you’re a registered voter and give you the option of registering there. With Automatic Voter Registration, every eligible person would instead be automatically registered and given the option to opt out.

“When you say, ‘everybody is welcome to take part in this democracy,’ it really opens up access to the ballot.”

One benefit of Automatic Voter Registration is preventing eligible voters being removed from the voter roll.

“In Ohio, we now have what the secretary of state would call Voter Maintenance Laws that say if you have not voted in two presidential elections or if you have not updated your voter registration, you will be removed from the list,” said Griffin.

In 2019, more than 460,000 [Ohioans] were on the list to be removed from the voter roll. Voting rights advocates realized not all these names should have been on the list and began contacting voters and advocating for revised protocols from the state. In 2020, another 115,816 names were published to be removed after the general election.

“There were people on the list who are voting rights advocates who vote every cycle [asking] ‘how did I end up on this list?’

“We should have a better system in 2020 that will allow you to know when a person passes away or if a person moves, then they are removed.”

Griffin also wants to see Ohio implement an online portal for ballot applications. Right now, in order to vote by mail, you have to download a PDF, print it out and mail it in.

But not everyone has a printer. Not everyone has outgoing mail at their residence. Not everybody has a car or is able to drive. And many people of younger generations have never needed to mail something and don’t know how.

“Right now, [the request for an online portal] is before the Ohio legislature. It’s Senate Bill 191,” said Griffin.

“We really think that with proper advocacy, working across our state, with our secretary of state and with our board of elections, that we can really change for the betterment of all Ohioans in the next election.”