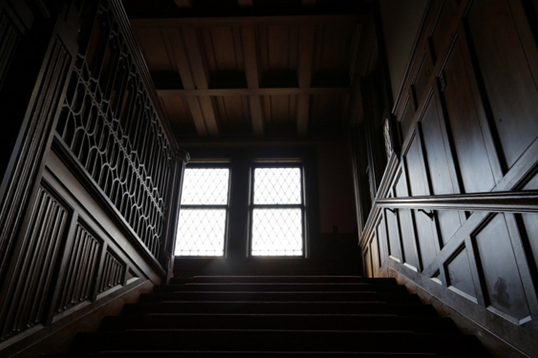 Ask around and legend has it that roaming the hallways and rooms of Samuel Mather's former mansion are residents of the eternal kind.

We had this experience a few years ago, and thought, given the time of year, that it was worth the trip down memory lane.

Years ago a member of the grounds crew had to pay a visit to Mather Mansion because something had set the motion sensors off at 2:00 a.m.  As he walked the building, he said that the elevator inexplicably began operating and that he heard glasses clinking, people laughing and music wafting through the halls.  He was the only one in the house.  After leaving, he swore he’d never return.

Or there’s the time a member of the housekeeping crew says she was forcibly grabbed and shoved out of a room she was cleaning.  Again, she was supposedly alone.  And the kicker? The vacuum turned on and followed behind her.

Ask around and it’s likely you’ll hear similar stories of odd goings-on in the former Millionaire’s Row mansion.  Faucets turning on without warning.  Eerie moaning and knocking.  Disembodied footsteps.  It’s a veritable cornucopia of terror if you believe the paranormal is real.

In what has become one of the Alumni Association’s most popular Passport Cleveland tours, a group of brave alumni recently joined the Ohio Ghost Hunters for an investigation into whether Mather is indeed haunted.

Based out of central Ohio, the Hunters are a group of scientific and psychic medium investigators traveling the state, gathering evidence of the paranormal and offering solutions on how to address otherworldly phenomena.

Peggy led the group into what is believed to be Samuel Mather’s former bedroom—a cavernous room with elaborate woodwork and candle-like wall sconces—set up an electromagnetic field detector and what’s known as a Spirit Box that can supposedly interpret voices from the "other side," turned off the lights and initiated an investigation.

It started with basic questions.

“Is there anybody here from the Mather family?” Peggy asked.

“We’re not here to do anything but ask you questions,” she assured whatever, whomever they hoped to encounter.

“Are there any spirits that haunt Mather Mansion?”

“Me,” a voice supposedly intoned through the Spirit Box.

“That sounds like a child,” Peggy said.  "What's your name?"

Though they never found out the child’s identity, two members of the Ghost Hunters were fairly certain they could distinguish two separate voices communicating.

“How about we come back sometime?” Peggy offered as the evening drew to a close, following that with a farewell.

Through the white noise of the Spirit Box, what sounded like “goodnight” replied.

“Did you hear that?” Peggy chuckled.