How gratitude drove one alumna to success 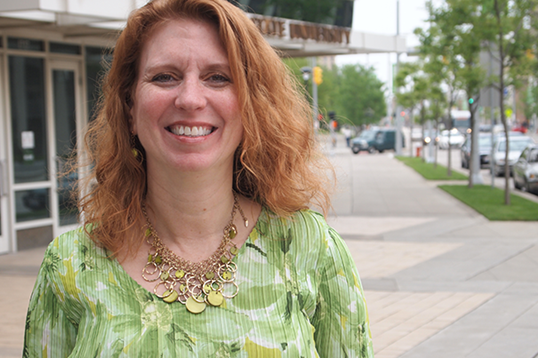 How gratitude drove one alumna to success November 16, 2018

It wasn’t only after Lisa Ryan found the beauty in her life that she saw a turnaround.

We talked to alumna Lisa Ryan a few years ago and thought that her message--of our appreciating the lilies in the valley, the silver linings to the clouds--was an appropriate one as we head into holidays.

When Lisa Ryan, BBA ‘95, MBA ‘98 walked across the 2000 degree burning coals with her bare feet, she knew she could do pretty much anything.

“I have to admit that I had an ‘oh crap’ moment, where I kind of paused and looked at the fire and realized it was hot…,” she laughed.

“It wasn’t until the next morning that I was even sure that my feet weren’t burned.”

It was 1987, and Ryan was participating in one of popular life coach Tony Robbins’ early seminars which culminated in a firewalk, where attendees traverse a 12-foot bed of white hot embers.

“I have no idea how we can do it,” she admitted.

But she did, and it turns out that the year 1987 quite literally redirected the course of her life.  In part because of the firewalk, but largely because she was introduced to the power of positive thinking.

“It set the core of who I became,” she said.

People balk at the idea, but Ryan knows that it works, because she’s seen it work for her.

When she was nearing her thirtieth birthday, she slid into a depression.  Life, it seemed, wasn’t going as smoothly as it was for her friends.  But it wasn’t only until she found the beauty in her life that she saw a turnaround.

Some years later when her six-figure medical sales job of 15 years abruptly eliminated her position, she was forced to choose to deplore the unknown or embrace the opportunity that awaited.  Ryan chose the latter and, as before, she quickly rebounded, moving into her life’s passion as a motivational speaker.

There are detailed studies, ideas, whole philosophies, even, that suggest positive thinking attracts good things your way.  Ryan has probably read most of them.  She spouts off stats as matter of factly as she recounts the details of her life, but for her, it’s really a matter of the heart.

“I was blindsided when my [medical sales] job left,” she said.

“I went through all of that anger and depression, but I also made the conscious decision to look for things that I could be grateful for.”

Ryan urges other people, who are facing challenges, to do the same.  She records her appreciation in a gratitude journal she started a few years back, daily listing 3-5 items about life that are worth a smile.

Even if you try it for 30 days, Ryan makes this promise.

“I can guarantee you, at the end of 30 days, your life will be different.”