New men's basketball coach wants wins both on, off the court 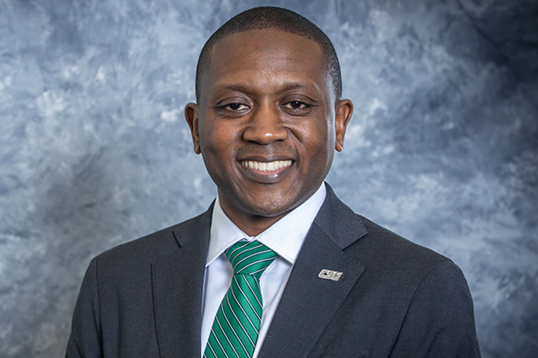 New men's basketball coach wants wins both on, off the court September 16, 2019

If you were to identify the guiding force in Dennis Gates' perhaps unconventional approach to coaching basketball in just one word, it would be: love.

When Dennis Gates was formally introduced as CSU’s new head men’s basketball coach to the campus community back in July, he, at times, could barely keep his emotions together. Standing on stage in the Student Center Ballroom, he’d pause momentarily to collect himself, the room fixed on him as he dabbed his eyes with tissue. And then he’d continue…and stop again, this ebb and flow of realizing a lifelong dream yet being keenly aware of what it took to get there.

He came from Chicago’s inner city, a place he admits had its fair share of challenges. His family lived each day, working to keep the roof over their heads, the bills paid and food on the table. Just making it.

The lure of the streets was an omnipresent force, yet young Dennis was all but certain he was destined to craft a new narrative for the Gates family. After all, he had younger siblings trained on his every action, hoping to emulate their big brother. Even then, he knew life could be different, better.

So he found a network of people to lift him, to keep him on track while the temptation to cave to his environment was an arm’s length away. One wrong turn, one wrong decision could have derailed everything.

“I wouldn’t be here today if teachers, professors and coaches didn’t pour in my life,” he said.

And in July standing here at CSU, looking out, many of those people were looking back at him, people who he says never gave up on him. His parents. His siblings. His wife and two kids. Even the coach who recruited him to play college basketball at the University of California, Berkeley drove from Michigan to be front and center.

The kind of support that continually lifted Coach Gates to each station in life is the kind he plans to give to his student-athletes. He doesn’t expect much success if he has not properly invested in the lives of his players. Relationships, he says, are key.

“We have to look beyond the scope of athletics.”

He is certainly confident in his ability to properly build a basketball program from the ground up. And rightfully so. He didn’t become one of the most highly regarded assistant basketball coaches in the country for nothing.

Yes, he’s resolute, a man dogged in his pursuit of excellence with a plan he’s sure will right the ship.

“When you have a plan in place, you don’t have room to think about fears,” he says, almost daring anyone to question whether he has what it takes.

Yet for all of his acumen on the court, he leans heavily on developing what will enable his team to succeed well beyond jump shots and free throws. He’s interested in the whole person and not just the athlete, so it’s likely he’ll spend just as much time talking life with his team as he does running drills.

And long after they’ve hung up their jerseys, he expects to get wedding invites and baby announcements from the players. He expects those “just because” phone calls.

If that happens, he’ll know he did his job.