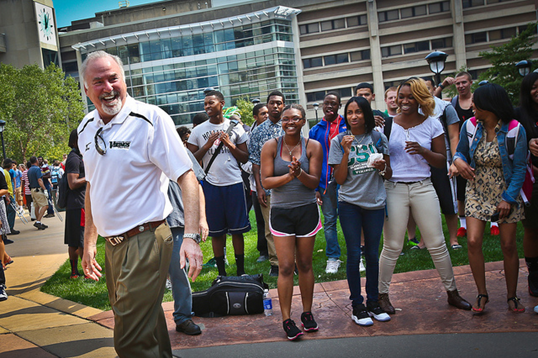 Cleveland State University President Ronald M. Berkman will retire from the presidency in June of 2018. Berkman, 70, is CSU’s sixth president and has served in that role since 2009. The University has launched national search for his replacement.

“It’s been one of the great honors of my career to lead CSU during an amazing period of progress,” said Berkman. “Thanks to the faculty, staff, trustees and donors, and to the Cleveland community that has embraced us, we’ve brought ‘engaged learning’ to life.  In so many ways, CSU is a different university than it was in 2009.”

“It’s hard to overstate the impact Ron has had on CSU during his tenure,” said Bernie Moreno, chair of CSU’s Board of Trustees. “He has led the transformation of the University across every dimension, from his focus on student success, to the many innovative community partnerships he’s created, to the remaking of the campus and his extraordinary success attracting philanthropy. We will miss having him as president, but we also owe him a huge debt of gratitude for putting us in position to attract a great candidate to succeed him.”

Moreno said Berkman approached him to propose the transition plan earlier this year. He added that the Board of Trustees is grateful that Berkman has given them ample time to find his successor, that he’s agreed to be available to help the new president and that he’ll be returning to CSU to teach following a one-year sabbatical.

A number of new initiatives that Berkman has undertaken will impact CSU in the years to come. In light of that, Berkman told Trustees he believed that the timing of the transition would help the new president get off to a good start.

“We’ve just successfully completed a number of major efforts, including our first capital campaign, and will soon be launching some large, multi-year projects that would be better to hand off early rather than in midstream,” Berkman added.

The search for CSU’s next president began in July. The Search Committee, chaired by Moreno, includes members of the University community as well as the community at large with the national consulting and search firm Wheless Partners guiding the process. Moreno believes the search will attract highly qualified candidates, thanks to the progress made under Berkman’s leadership.

“Ron has created tremendous momentum during his tenure as president, and the highly successful capital campaign he led has added even more,” said Moreno. “We want to do everything we can to maintain that momentum for the ongoing benefit of the University.”