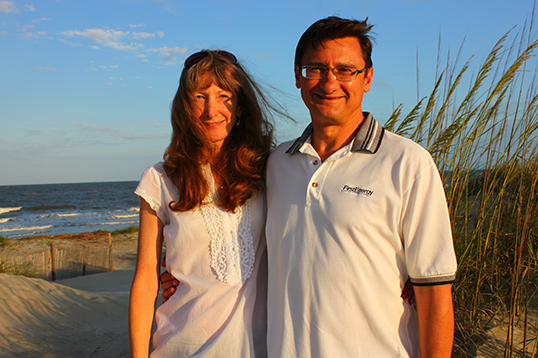 Congratulations to Linda Jurlina Baznik '78 and '81 and Edward Baznik '79 and '83 who won the Vowed Vikings basket of gourmet, handmade chocolates from Lilly Handmade Chocolates, co-owned by Joshua Montague BBA '06. Their love story – submitted by Linda in response to the mass email we sent – is classic CSU stuff!

Ed and I were introduced on a blind date in 1975 by fellow students at CSU. He was in electrical engineering and I was in the occupational therapy program. So we hung out in Stilwell Hall cafeteria, paying 3 cents for a cup of hot water, bringing our own tea bags and sharing my bagged PB and J sandwiches. Ed's classes were in Stilwell and mine were in Fenn Tower. The elevators there were run by paid help who shut the iron doors by hand. We played racquetball, skied at Bristol Mountain with ski club and went to cheap movies in the Cage. The Down Under Bar was under the bookstore. Ed and I commuted by bus and were stranded on campus in the blizzard of January 1978. President Watjaen did not close CSU until 11 am and I had an anatomy final that day. I had exactly $2 with me and I had a fellow physical therapy student friend with whom I spent the $2 drinking tea in a Chinese restaurant for hours waiting for a bus on Public Square. Other snowstorms I spent the night at Ed's parent's home where I generally wore out my welcome in Euclid (the buses didn't run real well in snowstorms back to Seven Hills). We had lots of friends who rode RTA together with us.

We had a common Slovenian background, married in 1981 and have four children. Go Vikings! CSU gave us a best value education, a long marriage and lifelong therapy and engineering friends. What more could anyone ask for?