THE BEST OF BROADWAY … IN BROOKLYN, OHIO

Robert Goulet, Topol, Richard Chamberlain, George Hamilton, Brooke Shields, Cathy Rigby. The litany of stars Anita Dloniak has worked with over the past four decades is a who’s who of Broadway.

Dloniak, who graduated from CSU with a bachelor of arts degree in communication, is one of the country’s premier national press agents. Working out of her Brooklyn, Ohio, home, she and her staff at Anita Dloniak & Associates manage marketing, publicity and promotion for Broadway touring shows.

“When I was in my 20s, I would travel to New York as a tourist, and the city seduced me,” she says. “But as time went on over the next decade, I knew I wanted to create my life here where I grew up. And thanks to the wonders of technology I can do so easily, connecting with colleagues in Seattle, Chicago, Atlanta, Pennsylvania, Texas, Kansas City, St. Louis – and, of course, New York.”

Dloniak’s passion for theater was sparked in 1969 at age 11, when she attended a touring production of Your Own Thing at the Hanna Theatre with her sister, Roberta. The rock musical, loosely based on Shakespeare’s Twelfth Night, had premiered off-Broadway the year before.

“Although Jesus Christ Superstar and Godspell are considered [quintessential] rock musicals, Your Own Thing was really one of the first,” Dloniak says. “And I’ll admit, I really didn’t want to go. All I could think of is, ‘Shakespeare is going to be boring.’ Roberta bought two of the cheapest seats – Row J, Seats 1 and 2. As it turned out, several of her friends ushered so they moved us to the orchestra section – Row B, Seats 2 and 4.”

As she watched the story unfold on stage before her, Dloniak was transfixed. Live theater, she explains, was clearly a departure from the movies and television shows she’d only known up until that point.

“My life that sunny Saturday afternoon was forever changed,” she says. “As I sat there, I said, ‘Oh my God, this is what I have to do.’ In what form, I didn’t know, but I just knew this was my world.”

Dloniak began spending weekends at the Hanna, stuffing playbills, ushering and working part time in the subscription department. When it came time for college, many of her high school friends opted to attend schools away from Cleveland. But Dloniak knew CSU was the clear choice for her.

“My parents paid for my books, and I paid the tuition,” she says. “Since I was able to live at home, I did not have to go into debt. I was very grateful for that fact when I graduated.”

Attending CSU also meant the future press agent could continue working at the Hanna Theatre. After classes ended for the day, she’d head to East 14th Street to “learn the business” under the watchful eye of thenmanager Milton Krantz.

“He understood my passion for the theater,” Dloniak says. “Everyone took me under their wing – the stagehands, the people in the box office and in group sales. These wonderful theater veterans gave me the working knowledge I needed to journey on in my career. I try to pay that kindness forward every chance I get.”

Dloniak worked her way up the ladder. In January 1979, while finishing her senior year at Cleveland State, she became the Hanna’s full-time public relations director. In 1993, she formed her own company.

“Yes, there’s a little bit of luck involved, and being in the right place at the right time,” Dloniak reflects. “But I believe you can make things happen for yourself: hone your skills, and have passion and drive for what you’re doing. 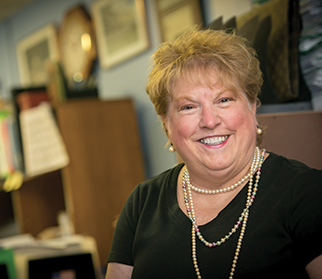