A “HUMAN COMPUTER” AHEAD OF HER TIME

An African-American woman born in the deep South in the 1930s, Annie Easley’s aspirations might have been simple: marry, raise a family, perhaps find a bit of work in an office or a hospital. But time, circumstance and an incredible innate drive led this determined young woman to a trailblazing career in aeronautical science with the nation’s space program.

Easley passed away in 2011, but not before giving a number of interviews and participating in a living history project for the National Advisory Committee for Aeronautics (NACA), now known as NASA. In these interviews, she frequently spoke of her mother, who developed in her an intrinsic desire to succeed and an unflappable belief in her own destined success.

And work at it, she did.

After graduating as valedictorian of her high school in Birmingham, Easley enrolled in Xavier University in New Orleans, majoring in pharmacy. Schoolwork came easily to her, and she did well in her classes. She married part-way through school and left New Orleans in 1954, relocating to Cleveland with her husband. She intended to enroll in the school of pharmacy at Case Western Reserve but, upon her arrival in town, found it closed. With school off the docket, Easley settled into her new life and took stock of her options.

Intrigued, Easley drove to NACA, applied for the job, and was hired as one of just four African-Americans on a staff of 2,500 people. Her skills in math helped her shine and her ability to adapt to a changing role suited her, since her work changed constantly as new technology emerged. Before long, physical computers took the place of the slide rules and calculators.

“I remember when we got the computers,” Easley recalled. “All of our instructions on a set of cards … We'd travel to some other building where the computers were, and feed those cards into a machine … and a new set of cards would be punched out. And then we'd physically take those cards over to another machine that would print out the answers on great big huge sheets.”

Easley enjoyed her work and explored her talents in mathematics, rising through the ranks at NACA.

In 1977, she enrolled at Cleveland State to study mathematics and complete the degree that had eluded her for more than 20 years. The decision to go to school felt right, but continuing her work at NACA while attending classes was challenging.

“I did much more than I thought I could ever do because I signed up for two classes, while working,” she said. Eventually, she took three classes at a time, which was considered a fulltime course load by Cleveland State.

“No one told me it was considered a full load, because I would have said, ‘I can't go to school full time and work full time,’” Easley said. NACA assigned her to a new schedule that allowed her to arrive at work at 6:30 a.m. and make it to CSU by 4 p.m. to begin six hours of evening classes. She did this three days a week until she was able to flex her work schedule and attend the daytime classes necessary to complete her degree. She was working six days a week to finish both her work hours and her classroom hours.

“I was determined to do it,” recalled Easley. “It worked for me, and I'm glad I did. I still try and offer encouragement to say, ‘You're never too old if you want to go back to school.’”

Easley was never able to secure scholarship support from NACA, despite the fact that some of her colleagues received it. She paid for her degree out of her own pocket because it mattered to her.

She retired in 1989 and spent her retirement years tutoring, volunteering for community organizations, and taking on new passions, including skiing.

When asked if she considered herself a pioneer as a woman working in math and science, she said, “I [was] out here to do a job and I knew I had the ability to do it, and that's where my focus was, on getting the job done. I was not intentionally trying to be a pioneer. My mom said, ‘You can do anything you want to, but you have to work at it,’ and that was part of it. With her strong teachings, I was able to do it.” 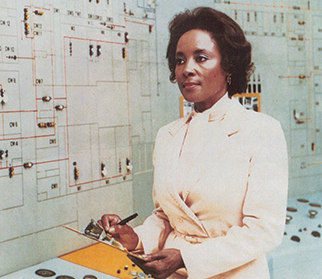