AIMING FOR THE STARS WHILE REMEMBERING HIS ROOTS

Bertram L. Wolstein, called Bart since boyhood, was the son and grandson of Jewish emigrants from Eastern Europe who settled first in New York City and then permanently in Cleveland. His father, Joseph, was a cloth cutter; Sarah, his mother, held a variety of clerical jobs.

According to Wolstein’s autobiography, Crossing the Road to Entrepreneurship (2004), his parents did not embrace the culture and freedoms of their new homeland as eagerly and confidently as their son. “Life was hard for poor Jews in 19th century Russia, and my grandparents and their children never expected more when they came to America,” he wrote.

Their unstoppable son, however, expected the world. For him, America was a roadmap to opportunity. But he also believed that nothing happens by itself so he built his dream on hard work.

In grade school, he was a Cleveland Press paperboy and a novice merchant stocking shelves at his aunt’s fruit market; during the hot days of summer he pulled a wagon full of iced soda pop through the city to sell to construction workers. As a teenager, he worked in drugstores, in a bakery and in his uncle’s shoe store.

By age 17, as his autobiography recalls, he was a “full-fledged working machine,” earning money in a commercial display factory, as a disc jockey at local parties, and as a hot dog vendor at the old Cleveland Stadium – a job this sports-loving man was later to describe as the “Cadillac of jobs for teenagers.”

Wolstein enlisted in the U.S. Navy immediately following his graduation from Cleveland Heights High School and, for the next three years, served as a medical corpsman, primarily in the South Pacific. His military service was formative, and when he was discharged in 1946, he returned to Cleveland as a First Class Petty Officer with new convictions about the course of a life in which failure was not an option.

One of the first moves he made in the direction of success was his marriage in 1948 to his teenage sweetheart, Iris Shur. Her father had emigrated from Lithuania, and she shared with Wolstein the confidence that America was filled with promise.

In 1997, he stepped down from the company’s chairmanship and two years later co-founded Heritage Development Co. He also owned the Cleveland Force soccer team for nine years.

At the time of his death, he was one the country’s most successful commercial real estate developers and generous philanthropists. His widow has carried on his legacy, donating considerable portions of their wealth to medical and educational institutions in Northeast Ohio and Israel.

Her generosity in memory of her husband includes $6.25 million to the Cleveland- Marshall College of Law – $5 million for building improvements and a $1.25 million challenge-pledge (which was matched) for law scholarships. In appreciation, the Cleveland State University board of trustees named the law school building Bert L. Wolstein Hall and the former Convocation Center the Bert L. and Iris S. Wolstein Center.

In 2003, the CSU Alumni Association honored Wolstein with its Lifetime Achievement Award. Thanking Iris, Wolstein accepted the award by saying, “Life is a team effort.” 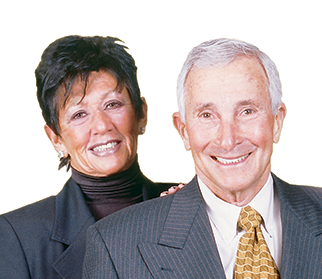