Bill Guentzler says one of his proudest accomplishments is “being an international ambassador for Cleveland in the film world.” And he has Cleveland State to thank.

Guentzler's love of film was nurtured at CSU, and he still confers with one of his former professors, Dr. Kim Neuendorf, when planning panels for the Cleveland International Film Festival (CIFF).

“I was able to secure an internship at CIFF during my senior year at CSU and I worked hard. The staff kept me on, though I never expected it to turn into a full-time job, especially one that I have held for 17 years,” he says.

Originally from Willowick, Guentzler enrolled at CSU with the intention of majoring in education, but switched to communication, graduating in 1999. Yet it was a course in modern languages that opened new horizons.

“One moment that definitely changed my life happened when I was taking a summer class,” he recalls. “It was called ‘Comparative Contemporary Cultures,’ and covered Germany, Austria and Switzerland and was taught by Dr. Klaus-Peter Hinze. I was just taking the class for the credit hours but I enjoyed it.”

Guentzler’s high school German teacher had also been a student of Dr. Hinze, and the CSU professor “spent time trying to convince me to go on the following year’s study abroad to Berlin,” he recalls. The gentle persuasion worked. By the end of the summer term, he signed up to study abroad, which he calls one of the best decisions of his life.

“My experience in Berlin was amazing and made me realize what a gift speaking another language is,” he explains. That realization was further cemented when he traveled to Slovakia -- after the classes in Berlin were finished – to visit family still living in the village where his mother was born.

“Studying Russian and German in high school, and growing up with Slovak spoken in my grandmother’s house, was not enough to speak fluently to my family, but they had a friend who was fluent in German. The entire week I spent there, I conversed with my family through him and in a second language to both of us.”

Guentzler has returned to Berlin and Slovakia every year since 2003.

His happy memories of CSU make him an ambassador for the University as well as the city, and he urges students to “take advantage of CSU’s location in downtown Cleveland, especially regarding internships.”

Modest about his achievements with the film festival, which completed its 39th season in March 2015 and has grown into one of cinema’s premier events, he believes that his role is “making a difference in people’s lives through stories” and adds, “it doesn’t hurt that I love movies!”

He says the best advice he can give others is to not limit yourself.

“It was through taking classes I otherwise wouldn’t have taken that I found my career. Those classes taught me more than just the subject matter, they taught me that life is all about taking chances and having the courage to do something that you may not have thought you could or would. It’s at those times that you figure out your true character.” 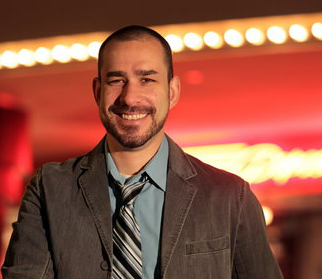