Before taking his talents to the West Coast, Bud Gundy lived in North Olmsted. He attended St. Edward High School and earned a bachelor’s degree in political science from Cleveland State University. He credits his CSU education with helping him become more receptive to new information while thinking critically and pursuing facts before making decisions. His fondest memory is of his English professor telling him he could go as far as he wanted to as a writer.

And go far he did. Gundy is a behindthe- scenes mastermind at KQED in San Francisco, the PBS and NPR affiliate for Northern California. He is a senior producer/ writer, who makes the occasional on-air appearance during radio and television pledge drives. In 2003, he received an Emmy Award for producing Lonely Island: Hidden Alcatraz, a documentary about Alcatraz Island. In 2015, he won his second Emmy, for directing State of Surveillance, a public affairs program.

Gundy began his television career in 1983 as program director at the Nationality Broadcasting Network in Lakewood. Following that, he worked as a desk assistant, associate producer and producer for newscasts at WKYC, Cleveland’s NBC affiliate. After stints as a business reporter and a marketing executive in Northern California, he joined KQED in 1994, where he enjoys what he considers a dream job.

“I am a very strong believer in the mission of both public television and National Public Radio. I love working for a non-profit broadcast service that does not need to be concerned with ratings at the expense of quality, information and entertainment,” he says.

When he’s not creating inspirational and educational programming, Gundy seeks out good writing in history books and “quality drama” in any form. In recent years, he has become serious about writing novels, having completed three to date, including Elf Gift, which was nominated for an Over the Rainbow award from the American Library Association’s LGBT committee. He is currently working on a fourth, described as a gay love story and adventure novel set in Restoration England.

In the past, he was involved in San Francisco’s Bear community – a group that celebrates individuality in the LGBT community, and in 2007 he was named Mr. San Francisco Bear. 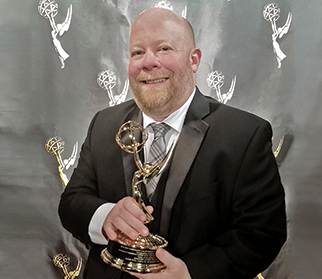