BREAKING DOWN BARRIERS, SERVING WITH DISTINCTION

CSU alumni Carl and Louis Stokes are two of the most influential Clevelanders of all time. Born and raised in the inner city’s Outhwaite Estates public housing development by their widowed mother, who supported the family by working as a housekeeper, the Stokes brothers used their education, skills and considerable charm to better their hometown, the nation and the lives of countless individuals. Their careers and lives are marked by the many racial barriers they broke down, their trailblazing ascents to leadership, their influence on African-Americans in public service, and political legacies that will stand the test of time.

Carl Stokes enlisted in the U. S. Army at age 18, and later earned a degree from the University of Minnesota. He came home to Cleveland and enrolled at CSU’s Cleveland- Marshall College of Law. A year after passing the bar in 1957, he was named assistant city prosecutor in Cleveland.

Stokes became active in civil rights and Cleveland’s Democratic Party. He was elected to the Ohio House of Representatives in 1962 and heavily influenced legislative redistricting to help strengthen Ohio’s representation in Congress.

His perseverance and magnetism helped mobilize both black and white voters. In 1967, he defeated Seth Taft, grandson of President William Howard Taft, by a narrow margin to become mayor of Cleveland. He was the first black mayor of any U.S. city.

During the campaign, Stokes said, “My style will be management by being on the street, management by walking around. Third persons won’t have to tell me what’s going on in our city. I’ll hear it, I’ll see it, I’ll touch it myself.”

Admired for his strong leadership skills, Stokes blazed a trail for women and minorities working at city hall. He worked on revitalizing Cleveland neighborhoods and is widely credited with helping maintain harmony in his city during the riots and racial unrest that broke out across the nation after the assassination of Dr. Martin Luther King, Jr. in 1968.

He was reelected in 1969 and completed a second term as mayor before returning to the private sector. Stokes served as the first African-American news anchorman when he relocated to New York City for a time in the 1970s. He returned to Cleveland in 1980, working as general counsel for United Auto Workers and then as a municipal judge.

Stokes died from esophageal cancer in 1996. The federal courthouse in Cleveland was named in his memory as the Carl B. Stokes Federal Courthouse Building in 2002. 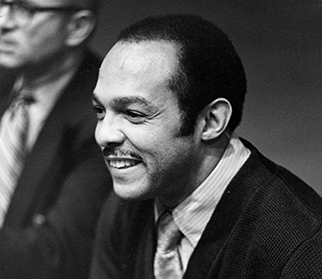