Homegrown city leader has vision and passion for CLE

Most Clevelanders in the know recognize the name Chris Ronayne. As president of University Circle, Inc., Cleveland’s hub for arts, culture, health care and education, he has been a force behind major improvements in the city.

It’s a far cry from his first job, staffing an ice cream cart at the corner of East Ninth and Euclid at age 16, which introduced him to the city that he loves.

Ronayne grew up in Cleveland and attended Miami University. After graduation, he moved out of state and worked for a Fortune 500 company. But he missed Cleveland and made a conscious choice to return home and jump into the urban redevelopment starting to take shape in the city. He enrolled at Cleveland State’s Maxine Goodman Levin College of Urban Affairs, studying urban planning while working his way through school.

“I chose CSU because I recognized that it used the city of Cleveland as a civic learning laboratory,” he says.

“He offered me insights on planning, politics and life that would prove invaluable in my future career,” he notes.

Post-CSU, he took a job with the Cuyahoga County Planning Commission, working on master plans for cities like Bedford, and helping people transition off welfare into jobs.

From there, he became Cleveland’s planning director, serving as the chief architect of the Lakefront Plan, a broad effort to reconnect Clevelanders to Lake Erie. He helped bring in more than $50 million in state and federal funds, his work setting the stage for successful development in neighborhoods including Detroit Shoreway.

“It was the best job I ever had,” he recalls. “The people were incredibly committed to Cleveland’s progress. I truly believe they were a part of the initial spark to Cleveland’s renaissance through the waterfront and neighborhood planning they did.”

From there, former Mayor Jane Campbell named him chief of staff and chief development officer. He was recruited to his current role at University Circle in 2005, where he and his staff partner with 40-plus member institutions to oversee the growth of Ohio’s fastest-growing employment district.

Ronayne, a 2009 recipient of CSU’s Distinguished Alumni Award, is quick to credit the University with more than a good education.

“The CSU lens broadened me and prepared me for the bigger world,” he says. Ronayne, his wife and their two children live in the same Cleveland neighborhood he inhabited during his CSU days.

“It’s fun to watch my kids explore this dynamic city and view Cleveland through their lens,” he says. 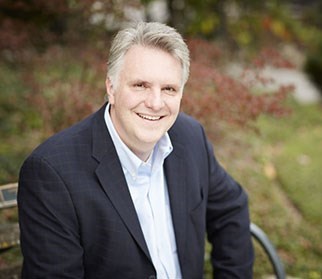