From designing large industrial control systems to serving as president of a local tool-making company to working as a photographer, Chuck Mintz’s career has run the gamut. But he says his proudest accomplishment is being a father.

He and his wife, Pat, an educator, raised two children. Laura is a medical doctor. Isaac, who is autistic, lives in a consortium home in University Heights and works at Vocational Guidance Services.

Mintz earned a master’s degree in electrical engineering in 1976 and remembers how faculty were willing to accommodate parents who had full-time jobs so they could thrive academically.

“What was nice about CSU is that you could learn things in a way that accommodated the rest of your life,” he says. “People at CSU always made it possible to keep going.”

Mintz is thankful for the solid education he received – and the “great soul food we used to get at a joint across the street.” Today, he continues to be amazed at how CSU has grown and helped foster a sense of vibrancy and place on Euclid Avenue.

Mintz worked for Reliance Electric Company from 1969-1994. He then served as president of Superior Tool Company from 1995- 2007 before making the jump to pursuing photography full time. His recent projects include an album about his son, photographs of homes in neighborhoods where he grew up that show the impact of foreclosure and, most recently, photos of Lustron homes.

Through a partnership with the nonprofit Ohio History Connection, Mintz is planning an exhibition of this newest work. Lustron homes are steel and porcelain baked-enamel structures built by the Lustron Corporation from 1948-1950. They were originally manufactured as a way to address the shortage in affordable housing options after World War II. A typical model is a simple twobedroom, one-bath bungalow.

“These homes are literally made out of what bathtubs and refrigerators used to be made of,” he notes. “The idea was to provide housing to suburban working-class Americans.”

The “Lustron Stories” project has taken him as far east as New England and as far west as Kansas. One of the more interesting tidbits he learned while interviewing and photographing owners in their homes is that you can’t drill into the walls. However, magnets work nicely, and owners use them to hang pictures. To this day, Lustron homes remain affordable, a reminder of the middle-class American dream of homeownership at a time when that demographic has lost ground. 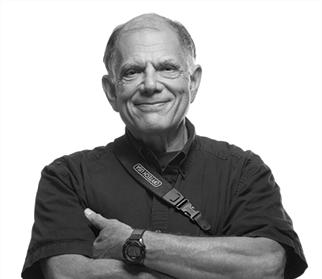