CSU WAS MUSIC TO HER EARS

Debbie Zamostny’s mother grew up during the Depression, then raised five children in Maple Heights while working long hours on her feet as a waitress. She had high hopes that her fourth child, Debbie, would get a desk job as a secretary.

Her dream came true. Problem was her daughter had dreams of her own. After only one week as a secretary, she thought, “This is really boring,” and began saving her money, determined to quit her secretarial job and go to college to study piano.

On the day of tryouts for Cleveland State University’s Department of Music, Zamostny looked around at her competition and knew she was at a disadvantage. She had taken only five years of piano lessons, and at age 19, she was a year older than the other music school candidates.

“I wasn’t very good,” she says of her piano playing. But she was determined.

She pounded out a Bach piece that caught the ear of Dr. Andreus Kuprevicus, a professor who had been a concert pianist for the Chicago Symphony Orchestra. He chose her to be his student.

“He taught me how to practice,” she says. “But he taught me about life, too. His grace under any situation was amazing.”

When Zamostny graduated with a bachelor’s degree in music/piano performance in 1983, she bid farewell to her mentor and threw herself into the world of music, playing in bands nearly every night of the week. But in the mid-1980s, band gigs began to dry up.

“I thought about what to do,” she says. “When I was trying to go to sleep at night, I played mathematical games, and I thought, ‘I’m good at math so I’ll be an engineer.’”

As with her dream of becoming a pianist, she started with a disadvantage. The last math class she had taken was 10th-grade geometry. She had never taken calculus, chemistry or physics because, having been groomed to be a secretary, she thought she would never need those courses.

Undaunted, she walked into CSU and asked to talk to someone about becoming an engineer. She graduated in 1990 with a bachelor of science in electrical engineering and promptly got hired by NASA Glenn Research Center, where she has worked in many facilities, including the Rocket Lab.

“I think my mom’s proud,” she says. “At least she’s forgiven me about the secretary thing.” 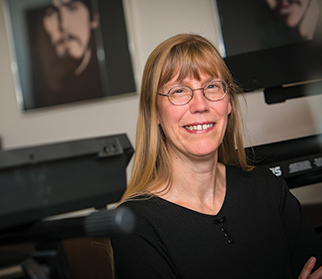