As a Garfield Heights High School student imagining his future, Don Washkewicz was directed toward three career choices by his parents – doctor, lawyer or engineer. They then gave him three school choices – Cleveland State, Cleveland State or Cleveland State.

So no surprise, he followed in the footsteps of his father, uncle and brother and enrolled at Cleveland State’s Fenn College of Engineering. It was the beginning of an unparalleled personal and professional partnership with the University.

“As a young man, much like my fellow students, I couldn’t see far beyond just getting through classes, graduating and starting my career,” says Washkewicz. “I certainly could not have envisioned the level of success life has brought to me, let alone dream that one day the College that I attended would be named after me and my name placed on the building.”

Washkewicz has been with Parker Hannifin since 1972, the same year he graduated from CSU with a bachelor’s degree in mechanical engineering. Putting his education to good use, he joined Parker as an engineer in the hose products division, where he received several patents for new hose and fitting designs. He quickly moved up the corporate ladder, serving as manager of research and development, divisional general manager where he grew a small operation to a work force of 400 people and $100 million in sales, vice president of the fluid connectors group, and president of the worldwide hydraulics group. He was named president of Parker Hannifin Corporation in 2000 and chief executive officer in 2001. He currently serves as chairman.

“I have very fond memories of my student days at CSU. My experience and education provided the strong foundation upon which I have built my career,” he says.

While leading Parker’s growth into a multibillion dollar global technology company, he also fostered the Parker/CSU partnership that includes a $1.5 million commitment to establish the Parker Hannifin Human Motion and Control Laboratory in the College of Engineering and to fund an endowed chair in human motion and control; a $4 million gift – $3 million for engineering scholarships and $1 million for two campus buildings, Parker Hannifin Administration Center and Parker Hannifin Hall; a $1 million leadership gift in support of the Allen Theatre renovation as part of CSU’s Arts Campus; lead sponsorships for Radiance, CSU Realizing the Promise, and much more.

Washkewicz received CSU’s Distinguished Alumni Award in 2002, an honorary Doctor of Engineering degree in 2004, and the President’s Medal in 2011. He currently co-chairs ENGAGE: The Campaign for Cleveland State University, which seeks to raise $100 million in support of student scholarships and student success.

Through his professional and philanthropic achievements, he hopes he is a role model. “Students need to know they can accomplish anything they want to,” he says. “They are getting the best education possible at CSU. Add persistence, hard work and a little bit of luck and you have the combination for success.

“I am honored to be a Cleveland State alumnus and to play a role in the success of this great University.” 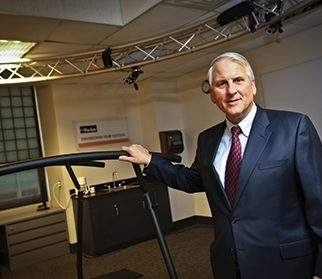