A match Made in Cleveland

More and more production companies are making movies in Cleveland, drawn to the North Coast by the Ohio Motion Picture Tax Incentive. But these tax breaks do not benefit local filmmakers. Just ask Eric and Amy Swinderman of 1031 Films, who succeeded in producing Made in Cleveland, the largest independent film ever shot in the city, solely through local grassroots fundraising efforts.

"It was a huge undertaking," recalls Eric. "We had to scrape together every nickel of our $50,000 budget. Fortunately, we were able to inspire the local community to donate more than half the money because they believed in us."

This wasn't the first time that Cleveland played a role in the success of this couple.

Eric was a 19-year-old film student attending Walsh University in Canton when he wrote a screenplay set in the city. "I always had a love affair with Cleveland. Whether it was going to Indians games or the Cleveland Museum of Art, I loved the culture of the city," he says.

After an injury cut short his college baseball career, he transferred to Cleveland State, where he became known as "the film guy" on campus.

Eric was the first person in his family to go to college. He not only credits CSU for helping him learn about film and television production from mentors such as Austin Allen, Alan Byrne, Laine Goldman and Jack Powers, but feels that his college experience also helped to prepare him for the real world. While attending CSU, he was a writer for The Cauldron student newspaper, member of the University Judicial Board and the Advertising Club, and worked for Conference Services.

Amy says she is as "Cleveland" as you can get. She was born and raised in the city, attended Cleveland Metropolitan Schools and penned her first story, Poochie the Crab, at age seven. A high school essay about writing that story won her a full college scholarship from The Plain Dealer.

When her acceptance at another university was misplaced, she enrolled at CSU, commuting from home for her freshman year and then moving into Viking Hall.

“My first year, I bought all of my family Christmas presents from the college bookstore," she says. "I was the first person in my family to attend college and I wanted to share my excitement with all of my relatives."

As soon as she hit campus, the journalism major went to the Cauldron office to inquire about a job. Soon she was writing for the News, Opinion and Culture sections, later had her own column, and by her sophomore year had become news editor. By chance, Amy interviewed Eric about the film he was making. They started taking classes together and have been inseparable ever since.

They both agree that the making of Made in Cleveland has been the highlight of their careers. What started out as brainstorming ideas over pizza with colleagues resulted in a heartwarming and funny anthology of 11 short films about life, love and the pursuit of happiness in the city of Cleveland. The film was written, directed and produced by people with connections to the city and features a cast and crew of current or former Clevelanders, as well as non-locals who have made a name for themselves on television -- Busy Phillips of Cougar Town and Gillian Jacobs of Community. Made in Cleveland premiered in 2013 at the locally owned Atlas Cinemas and was nominated for Best Picture at the Great Lakes International Film Festival that same year.

"We're really proud of what we were able to do and we can't wait to start working on other projects and see where the next adventure takes us. We know that whatever we do, we will always be indebted to CSU for bringing us together and getting the whole thing started,” they say.

“We would love for CSU to take on the challenge of providing the training, production assistance and practical help that local filmmakers need to make meaningful projects. We really believe that Cleveland could become known as the new hot spot for independent films, and that we could create a viable, sustainable industry -- not to mention hundreds, or thousands, of much-needed jobs -- if we had a capable entity like Cleveland State to help build that kind of infrastructure."

Eric is a creative services producer at WEWS-TV, responsible for writing, producing and editing in-house promotions and client commercial spots. Amy is a freelance writer/editor at Swank Media and a regular contributor to Inman News. The couple lives in Lakewood with their two cats. Their next film is slated for production in 2016. 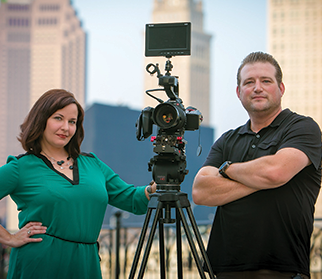