Eugene Malinskiy is excited to go to work every day for one simple reason: “I get to change the world.”

The 30-year-old entrepreneur, who created his first company when he was 16 and later sold it for a profit, is the founder of DragonID, a healthcare innovation and design firm that has grown to 20 employees in just a few years. One development the company has worked on is a device that prevents embolisms from entering the bloodstream during valve replacement procedures.

A native of Ukraine who moved to Cleveland with his family when he was 10, Malinskiy completed a bachelor of science degree at John Carroll University in 2008. He then headed to Denmark to pursue a pharmaceutical career. A change of heart brought him back to Cleveland in 2010, and he enrolled in the master of science in biomedical engineering program at Cleveland State University.

“I chose CSU because it had the sort of hands-on program I was looking for,” he says. One of the highlights of his CSU program, he says, was “working in small groups alongside Cleveland Clinic engineers on tough engineering projects for our capstone course.”

DragonID focuses on the medical device, health IT and surgery markets, and has a cross-functional team of gurus to help healthcare professionals create solutions. The DragonID team is working on a number of products, but one that's getting buzz is EuCliD, which will be used in transcatheter aortic valve replacements to help prevent emboli from breaking away and causing blood clots or strokes.

Malinskiy’s success is part of a growing biomedical sector in Northeast Ohio. Recently, DragonID moved from Shaker Launchhouse to the Heights Rockefeller building, where it customized its own space, including a lab, to accommodate growth. In the past few years, the company has leveraged its relationships with the Cleveland Clinic and other healthcare institutions in Cleveland.

Here’s how DragonID works. Malinskiy and his colleagues receive an inquiry from a client, then spend time vetting it, including attending surgeries, to understand the scope of the problem and potential solution. Once a solution is identified, the team builds a digital or physical prototype. Then, if the client decides to move forward, the company invests in bringing the product to market through animal and human trials.

DragonID is internally funded through contracts with hospitals and doctors. The company also has won grant awards from MAGNET and the Innovation Fund.

Malinskiy was nationally recognized in 2105 when Forbes Magazine named him to its 30 Under 30 list in manufacturing and industry. 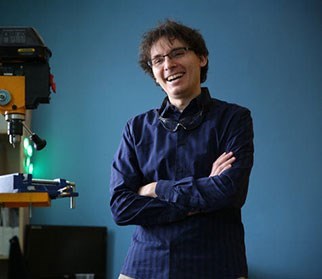