A stewardess of history

In 1976, 7-year-old Kelly Falcone-Hall went on her first and only family vacation. It was the bicentennial and the Falcones visited Williamsburg, Virginia, Washington, D.C., and a few other historical landmarks along the East Coast. Later that summer, the family spent a weekend exploring Hale Farm & Village in Bath, Ohio.

It would not be until years later that Falcone-Hall would come to realize how much this vacation would influence the rest of her life.

By 1995, Falcone-Hall had changed her undergraduate major from music to political science, transferred from Eastern Michigan University back home to Cleveland and enrolled at Cleveland State University, where she completed her bachelor’s degree and earned a master’s in American history. Just two days after graduation, she landed a paid internship as a reference assistant in the Special Collections Library at Western Reserve Historical Society.

The native Clevelander credits her coursework and the time she spent as a graduate assistant in the history department at Cleveland State with helping her find a good position so quickly, but—once again—it would not be until years later that the full impact of this move would be revealed.

Fast-forward to today and Falcone-Hall’s first internship has evolved into a 20-year career with the historical society, culminating in her 2014 appointment to the role of president and chief executive officer.

“My master’s degree in American history opened the door for me at Western Reserve Historical Society and is the foundation for over 20 years of study, research and interpretation of Cleveland and Northeast Ohio history,” she says.

Over the years, Falcone-Hall has held a number of other high-level positions with Western Reserve Historical Society including vice president for institutional advancement, chief operating officer and both vice president and director of interpretation at Hale Farm & Village, the 90-acre, 19th century outdoor museum that she toured with her family as a child.

At Hale Farm, her research was credited with breathing new life into the institution and making the living history experience much more immersive for visitors. Falcone-Hall developed popular programs that garnered both local and national attention, including Holiday Lantern Tours and A Fugitive’s Path: Escape on the Underground Railroad, and also hosted the 2013 national conference of the Association for Living History, Farm and Agricultural Museums.

“My most memorable position was as director of interpretation,” she says. “Hale Farm & Village is a unique and special place, and for many years I was considered the steward of the history of the site.”

Now at the organization’s helm, Falcone-Hall is responsible for one of the oldest (the society celebrates its sesquicentennial in 2017) and largest nonprofit regional historical societies in the country and she is still following a passion she inadvertently discovered nearly 40 years ago—engaging ordinary people in the American experience. 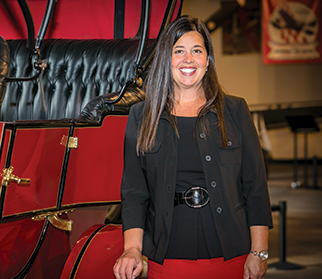