A BRILLIANT MIND ON THE CLEVELAND BENCH

Ask 100 people who knew Judge Lillian Burke what she was like and you might get 100 different answers. But you would hear a few common themes.

Lillian Walker Burke was born in 1915 in Georgia and raised outside Pittsburgh. After working for several years in Washington D.C., she enrolled at The Ohio State University, earning a bachelor of education degree in 1947. She then made her way to the Cleveland-Marshall College of Law, attending classes at night while working as a Cleveland public school teacher by day.

As a young attorney, she focused on workers compensation and was appointed to the Ohio Industrial Commission by Governor James Rhodes. In 1969, she was appointed to the Cleveland Municipal Court, and later was elected to that office. The first African- American woman judge in Ohio, she served on the bench until 1987.

Judge Burke was known as a mentor and supporter of women judges in Cleveland and volunteered with several civic organizations in town. She also was a popular speaker, beloved for her sense of decorum and sophistication. She often entertained in her home, where she always brought out her fine china and cooked gourmet meals. After serving, she might entertain her guests by playing piano or organ.

In 1988, Judge Burke received the Norman S. Minor Bar Association Trailblazer Award, honoring her long career and commitment to the judiciary. In 2002, the Women’s City Club of Cleveland named her one of the “Jewels of Cleveland.” The Cleveland Restoration Society recognized her work in preserving a historic building on East Boulevard in 2004, a project she undertook with the help of CSU Urban Development Law Clinic students.

Judge Burke died in 2012, less than a year after receiving an honorary doctorate from CSU. Her legacy lives on with the Lillian W. Burke Foundation which provides scholarships for law students at CSU and OSU. 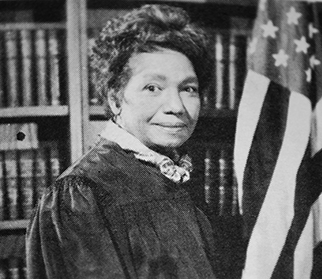