BANKER BY DAY, OLYMPIAN BY NIGHT

Heuman, BBA ’84, a senior equity trader with Huntington National Bank, won three gold medals in swimming at the National Senior Games held in Cleveland in 2013. The pool may seem to be far from the trading floor and board room but for Heuman, the two are very connected.

“Competitive swimming takes skill, passion, determination, discipline and focus,” says Heuman. “These are all skills that carry over into my work.”

As a trader, Heuman’s work days are filled with decision-making and quick action. She is well-prepared, thanks to her CSU education, but believes her days spent in the CSU pool – both as an undergraduate and today as a masters swimmer – helped build her stellar work ethic and prepare her for the challenges of working in a fast-paced, often male-dominated field.

A Cleveland native and proud Cleveland Heights High School grad, Heuman jokingly calls herself the “Eloise of Cleveland,” having grown up much like the beloved children’s book character while living with her family in the Statler Hilton Hotel in downtown Cleveland from ages one to six. Her family eventually moved to Cleveland Heights, where she swam for Heights High as part of a 1978 relay team that still holds the pool record.

Heuman launched her college career on a swimming scholarship at Bowling Green State University but transferred to CSU partway through to focus on academics. Aside from her time in the pool, her best memories of her undergraduate days are the interactions she had with her professors and the access she had to the computer labs and early technology.

Today, Heuman swims three times a week at the Robert Busbey Natatorium on the CSU campus as part of the U.S. Masters Swimming program, which uses CSU swim coaches to coach adult athletes. Her appearance in the National Senior Games was a highlight of her swimming career.

“Swimming helps me work off some of the stresses created from working in a very focused and high-intensity work environment,” she says. “I enjoy it for the health benefits but also for the fun.”

She also participates in the CSU Passport Cleveland program. “It’s a great way to connect with CSU alumni of all ages, while learning about some of the local gems around Cleveland,” she says.

As she looks back at her 30 years spent working in banking in her hometown, Heuman notes that Cleveland has become more of a cosmopolitan city in recent years.

“People are more positive and upbeat about Cleveland than they have been in the past,” she says. “And I am also happy to see that in banking, which is generally a conservative industry, more women are being promoted to executive-level positions.” 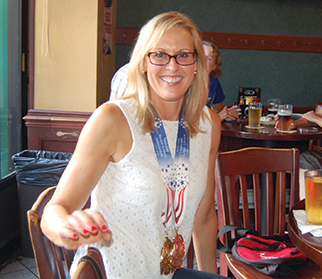