Louis Stokes rose from the poverty of the projects to become the first African-American to represent Ohio in Congress. Throughout his distinguished career, he championed social and economic justice, education, health care, veterans’ issues and more.

A highly respected leader during his 15 terms (30 years) in the U.S. House of Representatives, his many prestigious appointments included membership on the House Appropriations Committee, where he was influential in bringing revenue to Cleveland; chair of the Congressional Black Caucus; chair of the House Select Committee on Assassinations; and membership on the House Iran Contra Panel. After retiring as Dean of the Ohio delegation in 1999, he served as senior counsel for Squire, Sanders & Dempsey.

He earned his law degree after serving three years in the military during World War II and went on to argue three cases before the U.S. Supreme Court. They include a racial gerrymandering case that led in 1968 to the creation of Ohio’s first mostly minority congressional district that he would later represent.

He had a hand in several seminal court decisions, including Terry v. Ohio, the 1963 case that challenged “stop and frisk” procedures in the Cleveland Police Department and continues to influence police search policies today. Stokes often recounted the time he was searched by two white police officers as a 12-year-old boy on his way to a Boy Scouts meeting as the reason he was committed to the Terry case.

CSU awarded Stokes an honorary doctor of laws degree in 1989 and the Distinguished Alumni George B. Davis Award for Service to the University in 2013. Stokes was instrumental in helping CSU and Northeast Ohio Medical University establish the Urban Primary Care Initiative – a collaboration that is training primary care physicians for urban areas – and co-chaired its advisory committee.

He was a member of the Cleveland-Marshall College of Law National Advisory Council for many years, served on C M LAW’s Alumni Association board of directors, and established the Louis Stokes Scholarship Fund.

He was awarded 27 honorary doctorate degrees as well as the Congressional Distinguished Service Award. Numerous landmarks across town and across the nation bear his name, including Cleveland’s VA hospital and a wing of the Cleveland Public Library.

Stokes passed away in August 2015, just one month after announcing he had been diagnosed with lung and brain cancer. 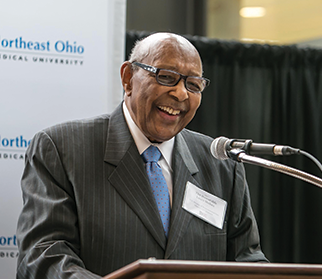