Even as a CSU student, he found a way to straddle the worlds of the humanities and the social sciences. He was an English major, graduating in 1987, and then completed a master’s degree in applied communication theory and methodology in 1990.

That unique blend has served him well in 26 years of working in advertising, initially at large agencies around the country. His first job at Wyse Advertising locally was followed by stints at Rubin Postaer & Associates in Los Angeles, Ogilvy & Mather in Chicago, Foote Cone & Belding in San Francisco and McCann Erickson in Detroit.

After a several-year interlude working with nonprofit organizations, Lantz founded his own ad agency in Royal Oak, MI called Factory Detroit Inc. He calls his work as executive creative director “emotionally satisfying” – in part, no doubt, because his dog, Ella, accompanies him to the office “so she can beg for treats. Everybody loves her.”

Lantz has a track record of working harder and smarter – a work ethic he believes characterizes many CSU students.

“I grew up in a working class family in Euclid. If you were going to go to college, Cleveland State was where you went. It was affordable, and the commuter-school experience meant I could work while going to school or vice versa. Like a lot of students, I paid my way through, which took five and a quarter years. It took a little longer, but I didn’t have a penny of debt when I graduated – unlike most of the folks I’ve met out in the ad world,” he says.

Lantz found time to serve as editor-in-chief of the student newspaper, The Cauldron. He remembers the camaraderie with his peers as “tremendous fun. We were an active, thriving student organization that created a real product, two times every week during the quarter. It was a great time to be on the paper.”

His studies as an English major provided the seeds of inspiration that would come to fruition in his career as a writer of television and radio commercials and magazine ads. Graduate school provided insights “weighted toward social research methods and statistics, which have been the other, non-writing side of my role in marketing,” he notes.

He advises students to “be prepared to work. Be a self-starter. You get out of college what you put into it.” Just as when he was a student, he believes “that sense of work ethic is still fundamental to the people who succeed.” 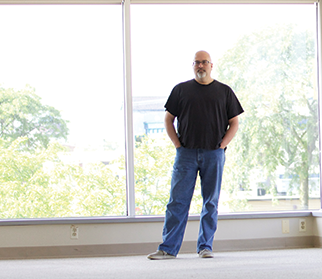