Heads turn when Melanie Murphy Miller walks into a room. Without doubt, her eye-catching beauty helped her become a TV personality, snatch the title of Miss Ohio and land a spot as a Cleveland Cavaliers dancer. Yet what people find most attractive is her inward beauty, which she discovered during a life-changing meeting during her first week at CSU.

As a girl, Miller scooted as close to the TV as she could to watch the annual Miss America pageant. She desperately wanted to be on that stage someday. Still, she was bullied so badly in middle school and high school by tormentors who threatened to kill her that she could have easily given up on a goal that required confidence, mental fortitude and purpose.

She escaped her bullies when she graduated Midpark High School in Middleburg Heights, Ohio, but the young adult was still in search of her life’s purpose, not sure if she should pursue nursing or journalism. Her first week at CSU in 2004, she found it.

Eager to take advantage of everything CSU had to offer, Miller went to an activities fair. She signed up for every group that interested her, but only one followed up with her, Campus Crusade for Christ, now CRU.

“The president of the group contacted me and asked me to meet for coffee the next day. So, I did,” Miller says. “She brought a small booklet with her called The Four Spiritual Laws. As she went through each page, I realized that God had a plan for my life, but I could not experience His perfect plan because I was a sinner. Our sin separates us from God. The only way to the Father is through His son, Jesus. At that moment, with my eyes filled with tears, I gave my life to Jesus.”

Armed with newfound faith and purpose, Miller dove headfirst into her goals. She joined the CSU Vikettes dance team and landed a job hosting a Time Warner Cable TV show, Another Look at the Movies. The opportunity set her on a path toward a bachelor’s degree in digital film and media production with an emphasis in journalism.

Miller, though, was always trying to reach for more. With eyes still set on the Miss America crown, she competed for Miss Ohio in June 2005. In the meantime, she won a spot on the Cleveland Cavaliers dance team her sophomore year at CSU.

It was an exciting and exhausting year to work with the Cavs because the team made it to the NBA playoffs with its star player LeBron James. The playoff run meant a longer season, in which Miller balanced school with six- to eight-hour practices, three days per week and danced in 48 games.

“It was the hardest thing I’d ever done,” she says. “It pushed my body in every way.”

The mental tenacity she developed during the grueling schedule prepared her for her biggest goal yet, winning the title of Miss Ohio 2006.

“(Winning Miss Ohio) is all mental,” she says. “So many girls, as soon as they meet the other contestants, start comparing themselves and knock themselves out. I believe the person who wins doesn’t succumb to that temptation.

“I believed in my heart that I was going to be Miss Ohio and Miss America. I walked through the pageant in my mind, imagining the weight of the crown on my head,” she adds. “It was still a surprise when they called my name (as winner), but I knew that all things were possible with God.”

Miller finally was going to realize her childhood dream of competing in the 2007 Miss America pageant. On stage, she thought of all the little girls sitting inches from their TV screens like she once did. This time, though, her name wasn’t called.

“I had such peace,” she said. “I felt the Lord say to me, ‘Melanie, you already won the greatest crown of all. It’s an everlasting crown.’ ”

After Miller graduated CSU in 2008, she worked part time as a TV personality at WBNX but felt the Lord leading her into a more service-oriented profession. She started mentoring at-risk kids, the same kind of kids who had once bullied her, as youth director for the Salvation Army Kroc Center. There, she realized that though she had escaped her bullies years earlier, she had never forgiven them. So she finally did.

Today, she still works with young people as youth pastor at Church of the Saviour in Wooster, Ohio.

“God used each part of my life to bring me closer to Him,” she says. 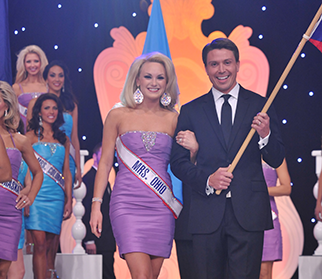