JOB IS PRESTIGIOUS, BUT HE DOESN’T TOOT HIS OWN HORN

While attending Cleveland State, Michael Warnick’s life took a turn that led to one of the most unique jobs in the country.

Originally in pursuit of an engineering degree, he had already navigated calculus and differential equations before coming to the realization that his heart just wasn’t in it. He felt called, instead, to a life of music.

Warnick began playing the trumpet at age 10, and continued through high school in North Olmsted. Although he was disciplined in his practice and had become a decent player, he didn’t consider music a viable career path. Howard Meeker, then-chair of the CSU Music Department, agreed that Warnick was not quite ready to be a music major, but did offer him a scholarship to take trumpet lessons and play in Wind Ensemble.

As an outlet to the rigors of electrical engineering, he practiced diligently, making great strides in his abilities on the trumpet. Three weeks into his final statistics course, he appealed to the Music Department to admit him as a music performance major. Once accepted, he was on a seven-year path to becoming a professional musician, earning bachelor and master degrees in music performance from Cleveland State in 2001 and 2003.

The job was not easy to get. When a vacancy occurs in the Marine Band, an audition is posted in International Musician and sent out to college band directors. Highly qualified musicians from around the country travel to D.C. at their own expense to compete for one position. On his third audition attempt, Warnick competed against 96 highly skilled trumpet players and went through four rigorous rounds performing music excerpts over two days. After the fourth round of eliminations, he was finally awarded the position and accompanying title of Staff Sergeant.

As a member of this most unique band, Warnick is called upon to provide musical support for events at the White House. This can include playing in a brass quintet or a full band for state dinners, arrival ceremonies, and events of national significance. As a trumpet player, he is often tasked to play “Taps” for full-honors funerals at Arlington National Cemetery, Honor Flights for veterans, and other ceremonies around the National Capital region.

“It is a truly remarkable experience to be a member of “The President’s Own” United States Marine Band. I sometimes forget that I am taking part in American history as it unfolds. Playing for President Barack Obama’s first inauguration was one of those moments,” he says. 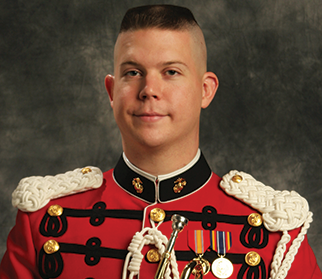