Philanthropist. Entrepreneur. Business and civic leader. Husband, father, grandfather. Monte Ahuja is all this and more.

Born and raised in Punjab, India, Ahuja was one of nine children in a middle-class family that stressed the importance of education. He attended Punjab Engineering College, earning a bachelor’s degree in mechanical engineering in 1967. After working for a year, he set his sights on furthering his education in America, earning a master’s degree in mechanical engineering from The Ohio State University in 1970.

In time, he and his wife, Usha, decided to make Cleveland their home. While working as an engineer for Lempco Industries in Maple Heights, Ahuja began thinking of a career change from engineering to business management. And CSU beckoned.

“Not many schools offered the opportunity to get an MBA while working full time,” he says. “CSU had an accessible evening program. But going through the MBA program was definitely the hardest time of my life.

“Since my degrees were not in business, I was required to take 90 credit hours of undergraduate and graduate courses. It was hard to keep up. I attended classes from 6 to 10 p.m. two and three times a week, even in the summer, while working a full-time job that had a lot of responsibility and required a fair amount of travel. Life was a real challenge. But I was so obsessed with getting it done, I finished in two and a half years.”

Ahuja graduated with a master’s of business administration in 1975. To this day, the family joke is that he pursued a second master’s degree to “match” his wife’s Ph.D.

For one of his final classes at CSU, an entrepreneurship course, Ahuja developed a business plan for a hypothetical company. The plan earned him an “A” in the class, and within months became the model for Transtar Industries Inc.

“I was encouraged to follow through with my plan by my professor, Dr. Jeffrey Susbauer,” says Ahuja.

From its humble beginning, Transtar grew to be the leading worldwide distributor of quality transmission parts to the motor vehicle repair industry. Thirty years after founding the company, Ahuja sold his majority control but remained active as chairman and chief executive officer. He sold his remaining interest in December 2010.

Today Ahuja is the founding chairman and CEO of MURA Holdings, LLC in Beachwood, a private investment company.

This proud graduate is one of CSU’s biggest champions. In 1991, he was appointed by then-Gov. George Voinovich to a nine-year term on the University’s board of trustees. A year later, he became board chairman – a post he would hold for six years to become the first alumnus and longest-serving chairman in CSU history.

“CSU has a very special meaning in my life, and I feel extremely fortunate and privileged to be able to give back,” he says.

Today, Ahuja serves as co-chair of ENGAGE: The Campaign for Cleveland State University, which seeks to raise $100 million in support of student scholarships and student success.

He holds the Distinguished Alumni Award and an honorary Doctor of Business degree from CSU. His entrepreneurial saga is even used as a case study in business classes. But he modestly says that he never envisioned his life being so successful.

“I’ve exceeded far beyond my imagination. And without Cleveland State, I would not be where I am today. My MBA provided the foundation for a business career that transformed my life. Like thousands of other students, I found at CSU an accessible, practical education. That’s something I will never forget. CSU will always have a very special place in my life,” he says. 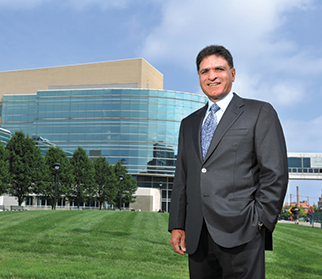