Norris Cole is a shining example of the fact that dreams, no matter how lofty they may be, can come true.

Cole’s dream began when he played basketball at Cleveland State University, but it certainly didn’t end there. His pro career started with the Miami Heat, where he was a teammate of LeBron James, and won the NBA championship in each of his first two seasons.

Cole played four standout seasons at CSU beginning in 2007-08. The Vikings made the NCAA Tournament the following season, and Cole was named the Most Valuable Player in the Horizon League in 2010-11.

“It was very special,” says Cole, who graduated with a degree in health science. “I loved the school, they supported me. The faculty and staff did a great job helping me start my education. I grew up a lot.”

Cole gives CSU coach Gary Waters a lot of credit for his success.

“He gave me a scholarship, he gave me a chance to play my dream — which was Division I basketball — and go to college,” Cole says.

“Once I got up there, he developed me as a basketball player and as a man,” Cole says. “He taught me how the game of basketball coordinates with life and how to be tough mentally, how to handle certain situations on and off the court. So, he played a huge part in my success in taking it to the NBA.”

“The relationship I built over the years is important to me,” he says. “I’ve been out of school for four, going on five years now, so that shows you right there how special it is to me.”

Cole was selected in the first round of the 2011 draft and ended up being traded to Miami.

And playing with James, of course, was a memorable experience.

“It taught me a lot,” Cole says. “He was one of the guys in the locker room I could talk to and look up to. He was very instrumental in me growing as a professional athlete, setting a good example for me.”

Many standout players go through their careers without winning a title. Winning two titles in his first two seasons “was like a real dream come true,” Cole says. “There are not a lot of times where people’s actual dreams really come true, and that was like a real dream come true – to play in the NBA, first of all, and then to play on the most high-profile team there is at the time with the best player in the world who was also from Ohio — not to mention Chris Bosh and Dwyane Wade playing on my team. It was great.”

Miami traded Cole to the New Orleans Pelicans last season. “I love coming home,” he says. “I love to play in Cleveland, to see people from Cleveland State and see my family. It brings back those memories of college.” 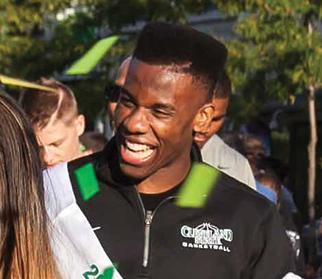