A MAGICAL CAREER WAS IN THE CARDS

Stepping onto Cleveland State University’s campus for the first time in 1999, Rick Smith Jr. had no idea he would become a world-renowned magician who would break two Guinness World Records.

“I thought I’d just get a business marketing degree and walk-on the baseball team,” he says. Yet magic always seemed to be in the cards.

Like most youngsters who see magic tricks for the first time, seven-year-old Smith was spellbound when his dad showed him some card tricks. Soon the boy began charging neighbors in his Lyndhurst community a nickel to watch him perform magic shows. But unlike most kids, his fascination with the craft didn’t disappear with adolescence. By age 15, Smith spent weekdays building magic props in woodshop class at Brush High School so he could perform magic shows at weekend birthday parties.

He began considering magic as a profession when his marketing professors at CSU showed exceptional support of his hobby by allowing every class project to revolve around his magic.

“Instead of doing a case study or integrated marketing plan for another company, I was able to create projects around magic. Everything for the business world, we used for the magic world,” he recalls.

In 2002, while waiting in the locker room for his baseball coach, he and some teammates started goofing around, throwing socks at one another. Smith couldn’t find a sock, but being a magician, he had a card in his locker. He threw it with such speed and precision that he cut a teammate’s arm. Wowed, his teammates suggested he try to break the Guinness World Record for card throwing.

“Oh sure,” said Smith, not knowing such a record existed.

He called Guinness and suddenly, his career as a magician was set into motion. Guinness agreed to fly from London to Cleveland. Every news outlet in Cleveland descended upon the Cleveland State Convocation (now Wolstein) Center. The air conditioning had to be turned off and the vents sealed. Smith had 52 chances – a deck of cards – to break the record.

The next day, his picture was on the front page of the Plain Dealer and his name was on every major talk show’s hot list. The Ellen DeGeneres Show, The Tonight Show with Jay Leno and Ripley’s Believe It or Not! wanted him. The calls haven’t stopped since.

Smith has made 26 national TV appearances and now performs 600 magic shows a year, turning down another 300 for lack of time. He never uses an agent to book shows, instead using the marketing skills he learned at CSU, he says.

His list of accomplishments seems endless. He’s garnered awards that include 2013 Corporate Entertainer of the Year, broken another Guinness World Record for most accurate card thrower in 2014, and rubbed elbows with such celebrities as comedian Howie Mandel when he appeared on America’s Got Talent. Yet fame hasn’t gone to his head.

On the same day he performs for the Cleveland Indians, he dazzles youngsters at a birthday party. Most recently, he started a company called Magic Gives Back, which helps Cleveland-area schools raise money by selling tickets to magic shows where he slices carrots and watermelon rinds with fast-flying cards and uses Las Vegas-quality illusions. He also finds time to teach a summer camp for elementary-age kids and mentor young magicians who want to follow in his footsteps.

Smith says his greatest thrill came when one of his young protégés appeared on America’s Got Talent. When Mandel asked where he learned how to throw cards, the boy said, “Rick Smith Jr.”

“Howie remembered me and said, ‘It’s people like Rick that inspire the youth of today for the future of tomorrow,’” Smith says. “That was my greatest compliment.” 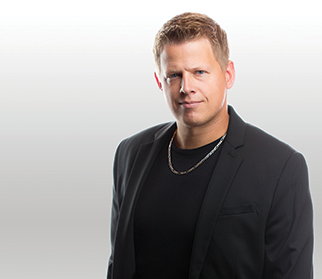