HE MADE A SPLASH ON CSU ATHLETICS

As a student-athlete, Busbey lost just four races in four years of collegiate swimming and broke more than 100 records in competition. He was Fenn College’s firstever All-American, recognized in both 1948 and 1949.

He was named a USA Olympic swim coach in 1964 and was unanimously elected a charter member of the CSU Athletic Hall of Fame in 1975. He received the National Collegiate and Scholastic Swimming Trophy, one of swimming’s highest honors, in 1982.

In 1999, just a few months before he died, he was honored for his years of service as a coach and mentor with the naming of the Robert F. Busbey Natatorium. Current students remain acutely aware of his legacy; swimming and diving events are filled with tales of his accomplishments and commitment to his alma mater and students.

A natural athlete, Busbey enrolled at Fenn College in 1946 and excelled in fencing, swimming, baseball and track. Swimming was his sweet spot and he started coaching the swim team after graduation in 1951, a post he would hold for 30 years. He is widely credited with taking the swimming program from a fledgling group of student-athletes to a powerhouse that attracts students from across the country and world.

When he wasn’t in the pool, Busbey coached golf and track. In 1966, he was named Cleveland State’s athletic director, a post he held for 24 years.

In addition to developing student-athletes, he helped develop CSU athletic facilities, including Krenzler Field, Wolstein Center and the natatorium.

Two CSU endowed scholarships, funded almost entirely by his former studentathletes, are named in his honor. 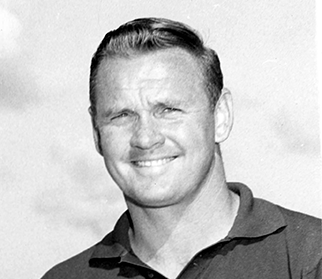