PASSIONATE ABOUT ENGINEERING AND CSU

Ronald Ledin has a wide range of accomplishments over a 50-year career. But he counts among his proudest “starting as ‘the blueprint boy’ in a 10-person consulting engineering company and growing it to a U.S. Top 100 firm.”

The president, chairman and CEO of Middough Inc., which he joined while still a CSU student, is a true advocate for the University.

“I have met many potential students – mostly employees – considering an engineering education or with two-year degrees. I have encouraged them to attend CSU. I tell them that education is the most important gamechanger in life – to adopt a lifelong learning attitude. You get out of education what you put into it,” he says.

A former mathematics teacher, Ledin took the leap to CSU to earn a bachelor’s degree in mechanical engineering in 1968 after having completed a B.S. in mathematics (1963) from John Carroll University. He chose what was then called Fenn College of Engineering for several reasons.

“CSU had an excellent reputation nationally as a great, practical engineering school. CSU was instrumental in developing the cooperative education program, and accommodated night-school schedules. Furthermore, CSU was and still is a ‘best buy’ in education. Plus, the urban setting was most convenient,” he says.

Like many CSU students, Ledin had a strong work ethic and considerable energy, “working two jobs, including weekends, in order to pay the bills.” Following graduation, he passed the professional engineer’s exam on his first try. And he relished using what he learned in his classes in his daytime employment, bridging the gap between theory and practice. The fact that some of his professors worked in industry themselves added credibility and a meaningful context he admired. And though technology may change, the insights and problem-solving skills he sharpened at CSU have allowed him to rise through the ranks of a complex organization, always learning and figuring out new ways to give back.

Middough employs numerous Cleveland State alumni, as well as students in the cooperative education program. Ledin himself has been very active with his alma mater, particularly with Fenn Academy, which helps develop a pipeline of high school students for engineering careers. He is a former member of the CSU Foundation board of directors, a former member of the College of Engineering Visiting Committee, and played a key role in the creation of CSU’s Arts Campus. He received the Distinguished Alumni Award for Service to the University in 2004.

Ledin is married to Donna; their daughter, Jill, has been a member of the Middough team for 25 years. 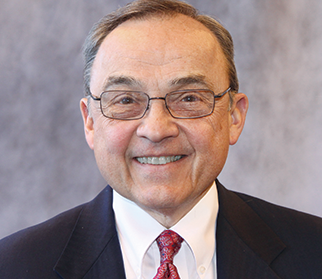