NEVER AT A LOSS FOR WORDS

Scott Raab’s passion for language and expression has taken him far from his hometown of Cleveland. But in his earthy, direct, detailed writing – infused with a splash of humor – there is still some of that Cleveland kid in this accomplished author and journalist.

On his second attempt at earning a college degree, Raab found support and encouragement for his creative writing at Cleveland State University, where he completed his bachelor’s degree in English in 1983. The same dogged determination that helped him succeed at CSU – as well as at the famed Iowa Writers Workshop – has followed him into a respected career in an extremely competitive field.

Raab earned a master of fine arts degree at the University of Iowa in 1986 and made Iowa his home for five more years. In that time, he successfully published literary short stories; made progress on a novel; and wrote for publications including Self, Sport and Seventeen. Though by his own admission, “I never, ever took a journalism course,” Raab’s skills with inventive phrasing and his willingness to offer unvarnished opinions led to op-ed columns in the Daily Iowan and Cedar Rapids Gazette. He even hosted a weekly talk show on KRUI-FM. His first national magazine feature story ran in Sport in 1988, a profile of renowned wrestler Dan Gable.

Despite his success, Raab has stated that “I was past 40 by the time I made an actual living at writing. [And] it took me more than 10 years to get a bachelor’s degree.” What may appear to be a creative sprint was, indeed, a marathon. And the jobs that maybe were less “glamorous” were never easy – sales, bartending, warehouse labor and night watchman.

Now living in New Jersey with his wife and son, Raab’s memoir about his travails as a Cleveland sports fan – and the story of LeBron James, including his departure in 2010 to join the Miami Heat – had the startling title, The Whore of Akron. There is little that is subtle about this CSU alumnus when he stands elbow-to-elbow with celebrities, athletes and assorted stars – but there is another side to him, too.

Beneath a brash writing persona is a man grateful for “the best wife, son, [and] dog in history.” He is inspired by Cleveland, “my hometown,” and calls his career “a blessing.” And he is a generous donor who has established the Scott Raab Endowed Scholarship in Writing at CSU. 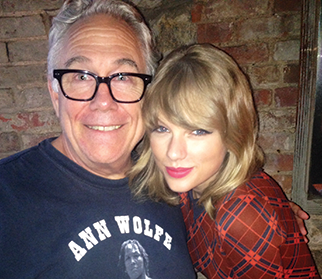