Hall of Famer excels in sports…writing

Terry Pluto, who has covered sports for The Plain Dealer and Akron Beacon Journal for three decades and has authored 23 books, got his start at Cleveland State University. He attended Hiram College for a year, but when his father lost his job as a daytime supervisor at Fisher Foods, it became too expensive. Pluto needed a place to finish his degree, and he found that and more at CSU.

“I went to CSU as a fallback. I needed a place to go and CSU was there,” he said in an interview with the Cleveland Regional Oral History Collection.

Pluto knew he wanted to be a writer, and had experience covering sports for the student paper at Benedictine High School, his alma mater. While attending CSU, he began freelancing for The Plain Dealer Sunday Magazine and other newspapers while working odd jobs. When he picked up a part-time job running basketball stats for CSU’s sports information department, his career began to take shape.

“A lot of people say in business it’s ‘who you know,’ ” Pluto says. “You have to put yourself in a position to get to know people. By doing that, you get to know more and more people.”

It worked for him. He met a few writers and editors from the Cleveland Press and the Plain Dealer at a soccer game. Soon after, he landed a job answering phones at the Press. One of the advantages of attending CSU was being able to make connections in the city, he says.

A first-generation college student whose grandparents emigrated from Slovenia, Pluto graduated from CSU with a degree in education in 1979 – although he learned from student teaching that the classroom was not for him.

After graduation, Pluto covered sports for papers in Greensboro, North Carolina; Savannah, Georgia; and Baltimore. Then he came back to Cleveland to work for the PD and later the Beacon Journal. He returned to his hometown newspaper in 2007, and has been there ever since.

Pluto has won more than 50 state and local writing awards and was inducted into the Cleveland Press Club Journalism Hall of Fame in 2005. The blunt, plain-speaking sportswriter is famously prolific. He’s written thousands of sports stories and columns, covering everything from the Cavs to high school teams. His newer books include The View from Pluto, a collection of sports journalism, and Glory Days in Tribe Town: The Cleveland Indians and Jacobs Field 1994-1997.

Pluto also does weekly jail ministry and has authored books about his Christian faith.

He offers this advice to would-be writers: “If you’re worried about being rejected and you’re shy and wait for it to come to you, it won’t.” Successful writers, he says, don’t take it personally. 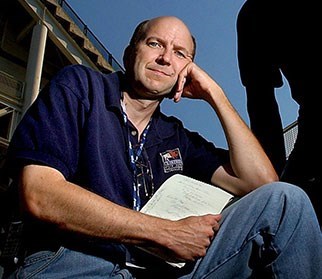