The Clintons said he “had a love of public service and dedication to journalism.”

President Barack Obama observed, “There wasn’t a better interviewer on television (or) a more thoughtful analyst about politics.”

And Cleveland State called him one of its own.

Tim Russert came to Cleveland in 1968, a Buffalo-bred baseball and news junkie looking for knowledge and adventure. The son of Timothy “Big Russ” Russert, a sanitation worker, his early years were shaped by his Jesuit education. When it was time to head to college, Russert chose John Carroll University, where he served as student body president and earned a degree in communication. From there, he enrolled at Cleveland State’s Cleveland-Marshall College of Law and graduated in 1976.

In 1984, he was hired by NBC News’ Washington Bureau and was named chief five years later. In 1991, a decade and a half after graduating from CSU, Russert took over as moderator of Meet the Press. He served in that role for more than 16 years, transforming the format of the show and moderating some of the most compelling and important political dialogues of the time.

Perhaps his most famous journalistic moment came in 2000 when he calculated possible outcomes of the presidential election live on-air, using a whiteboard and marker that now hang in the Smithsonian. He is widely attributed as the person who made the terms “red state” and “blue state” a mainstay in political coverage.

Russert authored two books, including Big Russ and Me, chronicling his life growing up in Buffalo with his father. Russert never forgot his rust belt roots, and believed that the work ethic and deep convictions of his dad influenced his own success.

“I stand on my dad's shoulders and my son stands on mine,” he wrote in Big Russ and Me. “And the only way we can do that is by accepting from each other, from generation to generation, these lasting lessons of life.” 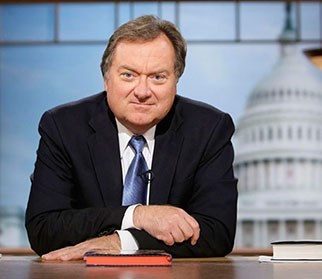