Tim Cosgrove fell in love with CSU on his first visit – a high school field trip on an RTA bus.

“It was the first time I had ever visited a university campus, and I was struck by the energy. At that time, Mather Mansion was a quasi-student-center, and the doors and windows throughout the first floor were wide open on a warm spring day. I saw all the students sitting around, laying on the grass, reading, talking, laughing. It was an incredible sight. After walking through the rest of the campus, I was entirely sold. Two years later when it was time to apply for college, CSU was my choice. Not to mention it was affordable, and I could stay at home. Going away to college was a financial impossibility,” he recalls.

As a full-time student, Cosgrove worked his way through college by waiting tables at Stouffer’s Inn on the Square and bartending at the Shire on CSU’s campus. He still found time to participate in Tau Kappa Epsilon, where he served as president, and on student government.

While still a student, he took a job at Cleveland city hall, where he developed a long-term working relationship with George Voinovich. He served as an executive assistant to Mayor Voinovich and director of policy and legislation for Governor Voinovich.

After earning his undergraduate degree, Cosgrove immediately enrolled in CSU’s Cleveland-Marshall College of Law while continuing to work at City Hall and as a waiter. He graduated in 1987 and passed the bar exam on his first try. He joined Squire Sanders and Dempsey (now Squire Patton Boggs) in 1993 and became partner in 2001.

Of CSU, Cosgrove says, “It’s hard to pick the best memory. There were so many great ones. Walking into my first class in September 1979 – Dr. Holm, American Government – on the fourth floor of Main Classroom is a memory I’ll never forget. I loved that class. Professor Holm was remarkable, and I couldn’t wait to read the material and attend his next class. But nothing compares to graduation day and sitting in Woodling Gym, looking up seeing my parents and my aunt beaming with pride. It’s a familiar CSU story, as I was the first in my family to graduate from college. My dad hadn’t even finished the ninth grade. I don’t know that I’ve ever felt a greater sense of accomplishment than that moment.”

Still, he finds time to be one of CSU’s biggest champions, serving 10 years on the board of trustees, including four years as chair. He is currently a member of the CSU Foundation board of directors and the leadership cabinet for ENGAGE: The Campaign for Cleveland State University. He has co-chaired CSU’s annual scholarship fundraising initiative, Radiance, since its inception and established the James and Elizabeth Cosgrove Endowed Scholarship in honor of his parents.

He lives in Kirtland with his wife, Kim, and children Michaela, Ian and Dawson. 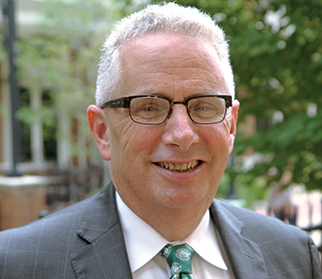