HELPING CLEVELAND BE THE BEST IT CAN BE

Fresh from earning a diploma from Cleveland State University and landing her first job in social work, Valarie McCall bought a house in her favorite place, Ward 5 in Cleveland. Right away, she had two questions – who was her city councilman and what day was trash pickup? Instead of asking a neighbor, she got her answers by attending community meetings. Those meetings set her on a path to becoming chief of government and international affairs for the city of Cleveland.

McCall was taught, by her grandmother who raised her on East 105th Street and by her alma mater Martin Luther King Law and Public Service Magnet High School, that being a good citizen meant being involved and giving back.

So during the day she worked at Templum House, a battered women’s shelter, and at night she continued to attend meetings, where she received an education in how the community operates. At one meeting, she was introduced to the man who would someday become Cleveland’s mayor and her boss, then-Councilman for Ward 5 Frank Jackson. At that point, however, McCall wasn’t thinking about a career in government. She had her sights set on going back to CSU.

While earning her undergraduate degree, she had been a commuter student, working at McDonald’s to pay her tuition. Between classes, she spent a lot of time at CSU’s University Center, and it was there that she became exposed to the idea of going to graduate school.

“I used to love University Center,” McCall recalls. “I used to eat, see friends, and take a nap. I learned my best study habits there. It made me feel like a resident student, not a commuter. I remember meeting graduate students who made me think about going to grad school.”

Councilman Jackson encouraged her to work at Midtown Cleveland Inc., a community development organization that focuses on developing the two square miles between downtown Cleveland and University Circle. Soon, then-Mayor Michael White offered her a job as the city’s director of empowerment zone, where she was responsible for a $200 million budget.

In 2002, she became Cleveland City Council’s youngest clerk in history. The following year, McCall gained international insight by traveling to Europe with the German Marshall Fund and meeting with European Union leaders in Prague, Hamburg, Berlin and Athens. She had the opportunity to tour the Olympic headquarters in Athens before the 2004 Summer Games, an experience that would help a decade later when she played a part in bringing the Gay Games to Cleveland.

On the day the USA invaded Iraq, she was in Berlin, which allowed her to take in initial European views of the war firsthand. She and a friend were in a Berlin bar, and “they pretty much applauded us,” she says. “They were saying we still love America.”

In 2006, Frank Jackson was elected Cleveland’s mayor, and he named McCall chief of government and international affairs. In 2012, she was awarded an honorary doctorate from CSU, and in 2003, she received CSU’s Distinguished Alumni Award.

She serves on several boards, including the Rock and Roll Hall of Fame, and in October 2015, she is being named chairman of the board for the American Public Transportation Association. Her main focus, however, is the 41st Republican National Convention, which is coming to Cleveland in July 2016.

McCall says it doesn’t matter that she and Jackson are Democrats. “This is a civic opportunity. It’s our Olympics and Super Bowl. It will have a $200 million impact on Cleveland, and 50,000 people and 15,000 media will be visiting,” she says.

She will do her part to make Cleveland shine. 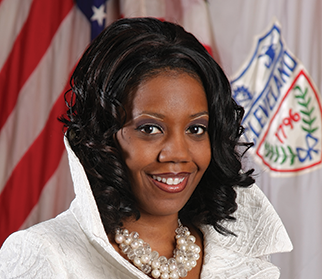