Nearly 30 years after graduating, Vince Menti walks around his Twinsburg, Ohio, music store and remembers the prophetic words of a CSU career counselor who suggested, "Maybe we can prepare you to own a music store."

What seemed like an unattainable goal at the age of 18 became a reality.

It was 1985 and Menti was taking introductory business classes as a CSU freshman when he met with a career counselor for the first time. He knew he wanted a college degree, but was unsure of the major he should pursue. He had purposely chosen Cleveland State to stay local and had a full life outside of the classroom, performing in local bands and teaching guitar at the music store in his hometown.

As the counseling session progressed, his passion for music became clear and the career advice he received that day would prove to be instrumental in uniting his passion with a purpose.

Menti graduated from Cleveland State in 1989 with a bachelor's degree in business administration. After college, he settled into a long career with the Sherwin-Williams Company, holding a number of positions over 25 years.

All the while, music remained a constant in his life as he continued to entertain area rock and jazz enthusiasts with his solo, duo and ensemble acts and teach guitar in his free time.

He was giving lessons at the Glitter Picker String Factory in Twinsburg when he learned that the owner was putting the business up for sale. He and his wife LuAnn purchased the store in 2012 and renamed it the Family Learning Center for Music.

Today, he continues to work for Sherwin-Williams as a tech agent and helps his wife manage the store and their staff of 12 employees. They give 200 lessons a week, including string, wind instrument, piano and drum instruction, voice lessons, music theory instruction and adaptive music lessons. They also sell a wide variety of musical instruments and offer instrument repair.

After hours, Menti can still be found in the spotlight of performance venues ranging from local clubs to larger gigs in the Flats and the Lake Erie islands. He has done television and radio appearances and has opened for Badfinger, Country Joe and the Fish, Pam Tillis, Reverend Horton Heat and the BoDeans. He also is an avid collector of left-handed guitars, with a current collection of 35 vintage and interesting pieces.

He still can hear those words from his counselor: "Maybe we could prepare you to own a music store."

"Between my real world experience with Sherwin-Williams and my Cleveland State business background, I am well-equipped to market, manage and troubleshoot this fun and rewarding business. You just never know where your education experience will lead you," he says. 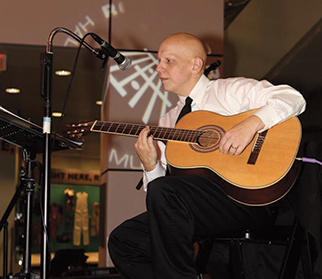