Cleveland sports have his heart

He may live in Connecticut and work for the world’s biggest sports broadcast network, but one look at Dwayne Bray’s Twitter feed and you can tell his heart is in his hometown.

His Twitter bio, limited to just 160 characters, calls out his East Cleveland roots—he’s a Shaw High School graduate—and his proud role as a Cleveland State alumnus. Scroll through his tweets and you’ll find links to Bernie Kosar articles and shout-outs to Cleveland’s notoriously diehard sports fans.

Today, Bray is a Peabody, Murrow and DuPont Award-winning senior coordinating producer at ESPN, overseeing the journalists who create magazine-style stories on issues facing athletes, coaches, and teams. An ESPN staffer since 2006, Bray has had major roles with Monday Night Football, the NBA, and myriad college sports programs.

His philosophy of sports reporting is simple. “Our job is to serve the sports fan,” he says. “That’s what drives the journalists at ESPN. In terms of hardcore investigative reporting, that means chasing the best stories out there.”

Bray’s roots in journalism go back to his CSU days, when he earned a bachelor’s degree in communication in 1988. He was a Livingston Award finalist for the nation’s best young journalist in 1988, after serving as editor of The Cauldron.

After CSU, Bray worked for the Medina Gazette and Dayton Daily News, before heading to Ohio State to earn a master’s degree in journalism in 1993. He moved to Los Angeles after grad school for a few years, then to Dallas to spend six years as a writer and editor at the Dallas Morning News, managing more than 100 reporters.

He has been nominated for a Pulitzer Prize for reporting three times and has led ESPN coverage that has won numerous Edward R. Murrow Awards, including a piece about human trafficking at the World Cup.

“Our work informs a national citizenry and leads to policy changes in sports and beyond,” Bray notes.

Bray doesn’t forget his own start in life and appreciates the challenges of growing up in an underserved, urban setting. He has coached youth basketball for more than 20 years, serving as a positive male role model to more than 200 kids.

But of the many hats he wears, his Cleveland sports fan cap may just be his favorite.

“I think Cleveland has the best sports fans in the world,” Bray says. “The fans cling to the Cavs, the Browns and the Indians, praying one day their faith will pay off.”

Bray notes that it is a great time to be a Cleveland fan. “All three pro teams seem to be up and coming,” he said. “I’m a sports journalist but I’m still a fan. I couldn’t do my job if I were not a big fan. I bleed Cleveland and Ohio sports.” 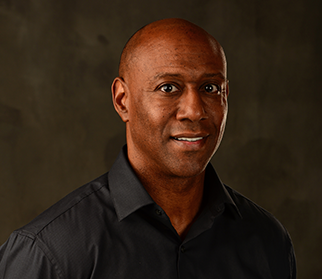