Lidia Trempe is working hard to make ethnic foods and traditions cool again. And she’s succeeding – as evidenced by the customers who wait in line to select choice delicacies at Rudy’s Strudel and Bakery in Parma.

Trempe has been part of the business for most of her life – her mother, a Ukrainian immigrant, bought Rudy’s in 1979. She was greeting customers at age five; the two women have worked side-by-side for years, and in 2008 Trempe became co-owner.

As a political science major at Cleveland State, a career in the bakery was far from her mind. In fact, she worked as a political lobbyist after graduation, then as a restaurant hostess. After marrying and moving to Chicago, she took a job in commercial real estate.

In 2007, she and her husband returned to Cleveland and she soon found herself back in the bakery, helping her mom. The energetic, babushka-wearing Trempe has put a new face on the business and a new spin on pierogis and paczki, attracting a new fan base of loyal customers.

Her touches include paczki flavors like buttercream, pina colada and vanilla stout; pierogis with names like the LeBron James, filled with chicken, cheddar cheese and broccoli; and collaborations with other local businesses like Mitchell’s Ice Cream, Platform Brewery and Market Garden. Rudy’s is now known far and wide for the biggest and best Fat Tuesday paczki parties and events like post-Easter Dyngus Day.

“I never thought I would have a career based on pierogi and paczki but I would not change a thing,” she says. “I’m happy to say that [then] former Vice President Joe Biden is a fan of Rudy’s. And I’m proud that I’ve made babushkas cool again.” 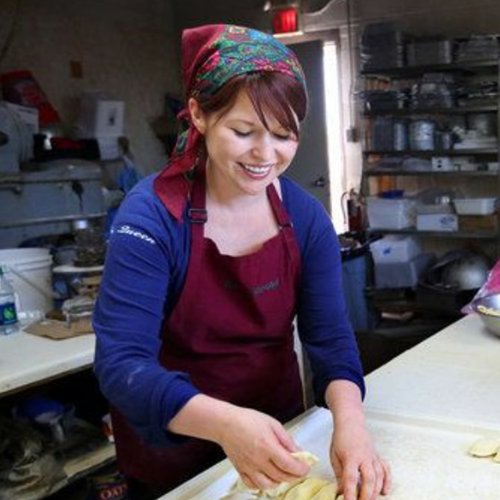