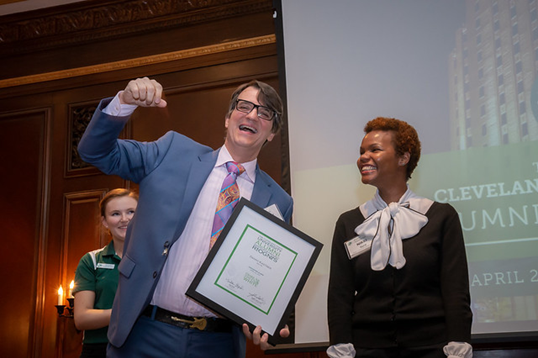 This year's group of honorees are changing the world and impacting their communities with creativity and ingenuity and includes the fourth class of CSU's Fascinating Alumni.

“Our alumni – some 126,000 strong – are the foundation of this University and our greatest ambassadors. They bring distinction to CSU and we are proud to honor them,” said Brian Breittholz, assistant vice president for alumni affairs and executive director of the CSU Alumni Association.

Amanda Pacanovsky and Martin Barnard for Outstanding Student Leadership. Both are Presidential Student Ambassadors and very active in the 1964 Society. Amanda will graduate with a degree in English and a secondary education licensure. She'll be the first college graduate in her family. Marty is a film and music major in the Mandel Honors College, who will graduate in 2020.

Dallas Chapter for Outstanding Chapter Program -- Established two years ago, the Dallas chapter of the Alumni Association hosted the first Lone Star state visit by President. The trip was so successful and the Dallas alums so receptive, the Association hit the road to connect with alumni across the country.

Sherwin Williams for Outstanding Chapter. The Sherwin-Williams chapter has been a trailblazer for CSU alumni chapters, even winning a 2015 Pride of CASE District 5 Silver Award for best volunteer engagement.

Merissa Price, BBA ’15, for Outstanding Young Alumni. Merissa has been the vice president of the Young Alumni Council for three years and is considered the heart of the organization. Her drive and initiative has been key to YAC's success.

Drew Anderson, BBA ’09, for Outstanding Young Alumni. Drew is co-founder of Cleveland Kraut, a Cleveland-based company that sells six varieties of sauerkraut in 12 states. It landed him a spot on Forbes magazine's 30 Under 30 list for Food and Drink in 2017.

Peter Bode, BS ’12, for Outstanding Young Alumni. Peter is a passionate environmentalist who is the brains behind Cleveland's upcoming commemoration of the 50th anniversary of the Cuyahoga River catching fire. His work as a project manager for the West Creek Conservancy is to educate the community about the importance of our river and lake.

Beverly Pettrey, BA ’15, for Outstanding Public Service. Beverly has been a member of the CSU Police Department since 2006 and has held the rank of lieutenant since 2014. She initiated the Rape Aggression Defense program on campus a decade ago and continues to manage it today.

Tim Tramble, MPA ’01, for Outstanding Public Service. Tim has greatly impacted the quality of life in Cleveland's Kinsman neighborhood. As executive director for Burten, Bell, Carr Development, Inc., he has worked for 16 years to revitalize the area and make life better for residents by tackling residential and commercial blight, working to clean up lead poisoning, providing community programs and more.

Dorann Block Taylor, BS ’69, MS '75 and Evelyn Finley, BBA ’72, MS '79 for David Balint Outstanding Volunteer Service. Together, they are considered the dynamic duo. Having championed the University for over three decades, they co-chair the Alumni Association's Education chapter and are deeply involved in fundraising for scholarships, recruiting students and assisting with career days.

Michael Ryan, JD ’96, for the Resilience Award. Earning a law degree from Cleveland-Marshall, he is a judge on the Cuyahoga County Court of Common Pleas Juvenile Division. Growing up in Cleveland's Longwood Estate projects, he could very well have become one of the juveniles he now sees in court. But he didn't. The hardships he endured helped shape the man he is. Today he uses his experiences and position to help others get their lives on track.

Jospeh Paoletta for the Presidential Citation for Exemplary Service to the Alumni Association. As catering director for CSU, Joe's passion for excellence is reflected in the creative menus and delectable dishes he creates to help ensure the success of every alumni and University event.

We also salute the fourth class of Fascinating Alumni. Click here to learn more about them.