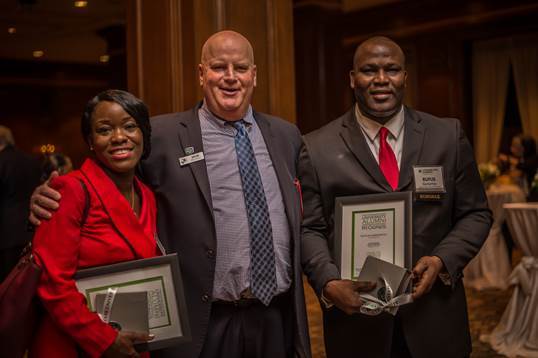 They’ve defied the odds, blazed new trails in technology, graced the silver screen and authored critically acclaimed novels and we couldn’t have planned a better evening to honor them.

At the Alumni Association’s first-ever Alumni Recognition Reception, the Fenn Tower ballroom was full and not just in capacity. It was bursting with laughter. Joy. And appreciation. It also helped that Cleveland was enjoying a mid-January day that saw temperatures reach 60 degrees.

“Over the past 26 years, 202 outstanding graduates have been honored with the Distinguished Alumni Award -- men and women who bring distinction to the University as business, nonprofit, and community leaders and public servants,” Kathy Jennings, CSU Alumni Association Board president, said at the event.

"And every year as we’re reviewing nominations, we realize there are way more than 10 or so individuals who, through their engagement and service, are having a positive impact on CSU, our students and the community.”

We’re proud that they call CSU home. View photos from the event

Geraldine was instrumental in helping rebrand our former Student Alumni Association into the 1964 Society to better connect students and alumni. She was responsible for restructuring the 1964 Society organizational board chart and she also secured and implemented a new tracking system for volunteers when she served as Volunteer Chair of the organization. Geraldine was the first 1964 Society president and a Presidential Student Ambassador.

She graduated in May 2016 with a BA in communication. She is now in grad school, working on an MPA (with a focus in public management) through the Levin College of Urban Affairs. She works in the Alumni Affairs office as a graduate intern and is an advisor to the 1964 Society. She also works as an au pair.

Paul has been a member of the 1964 Society since he was a freshman and has served as treasurer and president. He also is a 1964 Society Presidential Student Ambassador. Paul does an excellent job of connecting students to alumni, including assisting with Senior Series events which help graduating students navigate life after CSU. He assisted in development of the Viking Traditions website and its launch event, which was a huge success with over 400 students in attendance.

Paul is a student worker in Career Services, just completed a term as president of Sigma Phi Epsilon, and is one of two student representatives to the CSU Board of Trustees. He will graduate in May with a degree in finance.

This fall, during our homecoming celebration, the business alumni chapter introduced a new executive speaker series focusing on timely topics and featuring alumni speakers. The first program was "Energy in the 21st Century."

On January 24, the second program, “Cybersecurity,” will be presented in partnership with the Center for Cybersecurity and Privacy Protection in the Cleveland-Marshall College of Law. A program on customer service also is in the works.

This speaker series provides an excellent showcase for faculty and alumni experts in various fields to share their knowledge, promotes conversation and the exchange of ideas, and strengthens CSU’s partnership with the community.

Since its kickoff in 2014, the Sherwin-Williams chapter has been a trailblazer for chapters that have followed.

S-W, the largest producer of paints and coatings in the United States and one of the largest in the world, employs some 650 CSU alumni worldwide. Nearly 200 of them regularly participate in CSU corporate chapter events, which have included breakfasts, guest speakers, social outings, campus tours and more.

To celebrate its status as the first corporate chapter, everyone at the group’s kickoff received a customized Sherwin-Williams/CSU paint can, stir stick, painter’s cap and CSU paint color swatches.

Sherwin-Williams is a model for engaging CSU alumni at their place of employment and involving them in social events, networking, recruiting, mentoring, education and philanthropy that benefits CSU and its students.

Eugene is a biomedical innovator with a passion for medicine and technology who was recently named to Forbes’ 30 Under 30 list for Manufacturing and Industry.

Eugene graduated from the Washkewicz College of Engineering with a master’s degree in biomedical engineering in 2012. That same year, he founded DragonID, LLC, a Cleveland Heights-based biomedical engineering and innovation firm that has already created a device that reduces the risk of strokes following transcatheter aortic valve replacement, among other inventions.

A native of Ukraine, Eugene hosts field trips by CSU students to the DragonID’s offices and provides feedback on their research projects.

Bill enrolled at CSU in 1971 but was unable to complete his degree. He re-enrolled in 1997 and a year later, earned a bachelor’s degree in urban studies from the Levin College.

Bill is known as a “leader’s leader” and for nearly four decades, governments and organizations in Cleveland, Cuyahoga County and Ohio have tapped his expertise to tackle the toughest public problems with a citizen-first vision.

Bill’s legacy of public service includes director of the Ohio Department of Natural Resources; Police Chief and Director of Public Safety and Public Service for the city of Cleveland; executive director of the Department of Children and Family Services; CEO of the Alcohol, Drug Addiction and Mental Health Services Board, and much more. He is an emeritus member of the Levin College Visiting Committee.

In 2000, we honored Bill with CSU’s Distinguished Alumni Award for Civic Achievement.

Hannah earned a master’s degree in urban planning, design and development from the Levin College in 2011.

Hannah is the vice president of destination development and community affairs for Destination Cleveland, the city’s Convention & Visitors’ Bureau. She leads efforts to advance Cleveland as a visitor destination and enhance the visitor experience. This summer, she was highly successful in creating an unforgettable experience for RNC visitors.

Hannah also gives back to the community through civic engagement, serving on the city of Lakewood’s Planning Commission, the Cleveland Restoration Society's Board of Trustees, and with other organizations.

Rufus is a senior financial analyst with Forest City Realty Trust, a member of CSU’s Forest City alumni chapter, and two-time CSU alumnus with bachelor and master degrees in economics. Joan is an executive assistant at the Federal Reserve Bank of Cleveland who earned her Executive MBA at CSU in 2014.

Together they are a power couple and co-founders of the Liberia Economic Development Initiative, a non-profit organization that is working to reduce poverty and change lives by building public libraries in Liberia.

LEDI has awarded scholarships to Liberian students and partnered with CSU to raise funds when the devastating Ebola crisis struck Liberia.

Anna has been a member of our Young Alumni Council since its start in 2014 and at times has been a one-woman show for the organization. The YAC is a constituent committee of the Alumni Association that creates and supports programs and services for alumni who are 35 years old or younger. The Council provides educational, philanthropic, social, and networking opportunities to strengthen a lifelong bond between young alumni and the University.

Anna has helped build YAC into the successful organization that it is and she is our representative at many Engage! Cleveland YP events.

Dave earned a bachelor’s degree in electrical and computer engineering in 1969 and was a member of the Viking swim team. He has never forgotten those days in the pool and on campus and although he has lived in California for a number of years, he is an engaged alumnus and strong supporter of both CSU and the swim program.

Dave was one of the initiators, and prime backers, of the Champions Campaign and Heritage Project which raised more than $250,000 for improvements that will keep our Busbey Natatorium one of the top swimming facilities in the nation for years to come.

He also rallied his fellow swimmers in support of Giving Day at CSU and organized a Coach Wally Morton Roast that raised funds for swimming.

Dave is CSU’s man in California, serving as the lead contact between the University and the Bay Area Alumni Chapter.

Dave graduated in 1966 with a bachelor’s degree in engineering. A Viking who lettered in baseball, he holds the distinction of serving as the last president of Lambda Tau Delta and the first president of the Ohio Nu (CSU chapter) of Sigma Phi Epsilon. Dave is a former member of the Alumni Association Board of Directors. He is a one-of-a-kind fraternity historian who, to this day, keeps in contact with his brothers and maintains detailed records on their lives and achievements.

Bill Schutte is equally engaged with Sigma Phi Epsilon. Bill graduated in 1971 with a bachelor’s degree in marketing. In addition to his fraternity affiliation, he served on student government and as president of the marketing club.

From their student days until the present, both Dave and Bill have promoted Greek life on campus. They were instrumental in starting CSU’s Greek Alumni Council and most recently worked with students on the successful re-chartering of a Sigma Phi Epsilon chapter on campus.

Through chapter and executive council meetings, recruitment functions, and regional and national conferences, Dave and Bill spend countless hours engaging with students to ensure that both their CSU and Greek experiences are exceptional.

As bridges between students and fellow Greeks, as well as liaisons between their fraternity brothers and CSU, their commitment to volunteer service is unmatched.

Jessica earned a bachelor’s degree in communication in 2006. Jessica has seen more than her fair share of challenges, including foster care and homelessness. But she’s met these challenges head-on and is using her experiences to make life better for others in similar circumstances.

Jessica launched Homeless to Howard, an online fundraising campaign that in one week raised enough money to pay for freshman year at Howard University for a young man she met while volunteering at a homeless shelter.

She then launched Homeless To Higher Ed, a nonprofit dedicated to helping homeless and at-risk students escape poverty through education.

She’s an inspirational alumna who has overcome adversity and is inspiring others to do the same.

Presidential Citation for Exemplary Service to the Alumni Association

Steve is the manager of Elements Bistro, the site of many University, Advancement and Alumni-hosted luncheons and special events.

Without fail, Steve and his team go above and beyond the call of duty to provide excellent service and outstanding food and drink. They consistently ensure that the perfect menu is selected, that no detail is overlooked and that every event is indeed special and memorable.

Gail is the supervisor of CSU’s printing and duplicating department. And she is a wonder woman.

From her shop in the basement of Rhodes Tower and with her mighty team of three other workers, she serves the printing and duplicating needs of not only the Alumni Affairs office, but the entire University. It’s not uncommon for duplicating’s lights to burn well into the night.

Whether jobs are complicated or simple, planned well in advance or last-minute, Gail and her team consistently deliver a superior product and excellent customer service. And they do it with humor and a bit of sass.

This year we recognize our second class of Fascinating Alumni – 12 men and women who showed grit and resolve, overcoming obstacles to achieve their college degree, just as so many CSU students do today.

Click here to learn more about this year’s class.