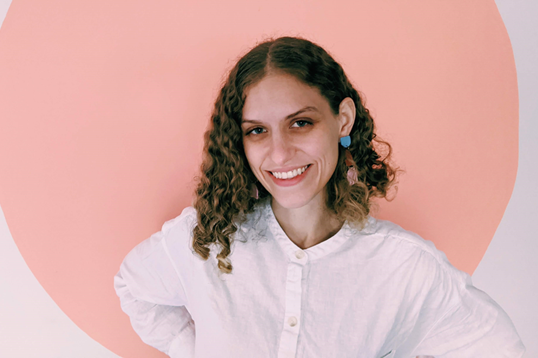 As a child, Claire Billingsley grew up witnessing housing instability. She didn't know it then, but those early experiences would shape her life's work: to combat housing inequity and end homelessness, in her words, "one way or another."

“Creating and defending the right of home, that’s what I’m here for,” says Claire Billingsley, who earned her MS in the Urban Studies program this May.

She has strong opinions about the causes of housing inequity and homelessness.

“It’s a purposeful system at work,” she says of the forces that keep people on the streets.

So, she wants to disrupt that system.

Growing up in Champaign-Urbana, Illinois, Claire often came face-to-face with that harsh reality for so many. Her father worked in construction for an affordable housing non-profit organization, and she would regularly accompany him to job sites.

She’d meet children her age—"like me," she says—who lived with holes in the ceiling above their beds, plumbing issues and other problems with what she thought were simple solutions. Though she didn’t know it then, she’s fully aware now that those early experiences planted the seeds for her passion today.

After receiving her undergraduate degree at the College of Wooster, she landed at AmeriCorps wholly by chance and ended up paired with the Lutheran Metropolitan Ministry, advancing until she was officially on staff in housing and shelter, working at its men’s shelter, the largest in Ohio.

It was during this time she enrolled at CSU. She says she wanted to learn the mechanisms at play behind housing inequity. What she left with three years later was deep insight and the ability to “effectively communicate its causes and impacts, and more importantly, effect tangible change.”

Personal agency and choice plays its part in homelessness, Claire says, but the chief culprit driving thousands of city residents to the streets, she learned, is affordable housing.

She’s since moved on from the Lutheran Metropolitan Ministry and now focuses on grant writing, funder outreach and more at CHN Housing Partners, a nonprofit affordable housing developer and housing service provider in Cleveland.

It’s work that suits her. An admitted introvert, she enjoys the behind-the-scenes work that powers the larger, more visible effort to address housing inequity.

Whatever her role, she’s resolute in her purpose.

“I want to work toward ending homelessness in one way or another.”

And for Claire, it's not enough simply to provide a pathway to securing housing for families. She thinks those houses should become homes and uses another one of passions — interior design — as a board member for Humble Design, a new non-profit to the Cleveland area. It's an outfit that dresses the new living spaces of families leaving homelessness.

"Our physical environment has such an impact on our general well being, happiness, and stability."