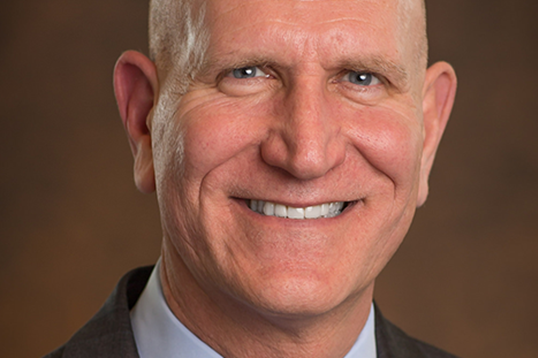 Harlan M. Sands, currently vice dean and CFO of The Wharton School at the University of Pennsylvania and a longtime academic administrator and public servant, has been selected as the seventh president of Cleveland State University.

Harlan M. Sands, currently vice dean and CFO of The Wharton School at the University of Pennsylvania and a longtime academic administrator and public servant, has been selected as the seventh president of Cleveland State University. His appointment by the Board of Trustees follows a national search led by a diverse search committee which included students, faculty, staff and members of the Cleveland community.

Sands will replace Ronald M. Berkman, who is retiring after nine years as president of CSU. Sands will begin his tenure July 1.

“CSU’s continued upward trajectory demands a leader with significant administrative skills, a deep respect for and experience with academia and a proven track record of accomplishment within higher education,” says Bernie Moreno, chair of the CSU Board of Trustees and chair of the Search Committee. “Harlan Sands meets all of those requirements and will be the visionary leader CSU needs to further its position as a leading urban research university. I am honored to introduce him as the next president of Cleveland State.”

“Through its commitments to higher education access for all, student success, engaged learning and connectivity with the community, Cleveland State is uniquely positioned to transform lives in a way that very few institutions can match,” notes Sands. “I am humbled to be chosen to lead this prestigious university and am excited to work with students, faculty, staff and community leaders to continue and enhance CSU’s important educational mission.”

With nearly two decades of experience as an administrator, research center director and faculty member at urban research universities, Sands is a highly regarded and widely respected higher education leader. He comes to CSU with a proven track record of advancing academic excellence, elevating faculty endeavors, championing research, and aligning strategies and operations to meet the emerging needs of higher education in the 21st century.

At Wharton, Sands was responsible for day-to-day operations related to financial affairs, business affairs, human resources, information technology and internal audit/institutional compliance, while also serving as a senior adviser to the dean on strategy and operations. The Wharton School was recently selected as the number one business school in the nation in U.S. News and World Report’s 2018 Best Graduate Schools Guide.

“President-elect Sands’ leading role at one of the most prestigious and innovative higher educational institutions in the world will be a major asset as Cleveland State continues to expand its academic and research quality, enhance value for students and grow its national reputation,” Moreno adds.

Sands previously served as senior vice president of finance and administration and chief operating officer at the University of Louisville, where he reduced operating costs, stabilized financial management practices and implemented several large-scale, revenue-generating opportunities in enrollment growth, student success and business support. Prior to that, he served as vice provost at the University of Alabama at Birmingham, where his responsibilities included budget and finance, enrollment management, and student success operations. He began his tenure in higher education at Florida International University as a faculty member in the Department of Criminal Justice. He later advanced to assistant then associate dean of the College of Health and Urban Affairs before serving as FIU’s associate vice president for research.

Before entering academia, Sands served 11 years in the United States Navy as well as 4 years as an assistant public defender in Miami. His many career accomplishments include distinguished service during Operation Desert Storm.

He received his bachelor of science in economics from the Wharton School of Business in 1984. He also holds an MBA with a major in finance from George Washington University and a J.D. from George Mason University. Sands and his wife of 17 years, Lynn, have two sons, Samson and A.J.