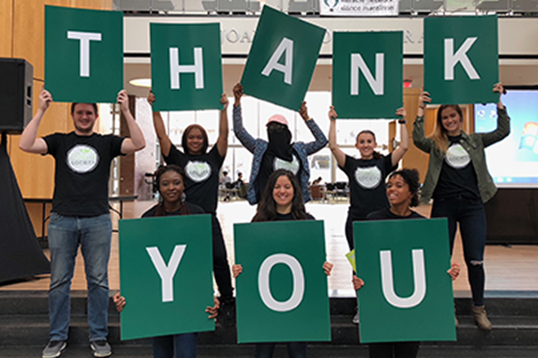 The event to support student success across academic Colleges, athletics and other units was held over a 24-hour period from 12 a.m. Tuesday, February 20, to 12 a.m. Wednesday, February 21.

“We are incredibly grateful for the generous outpouring of support from our alumni, students, faculty, staff and friends,” said Berinthia R. LeVine, vice president, University Advancement and executive director, CSU Foundation. “Thanks to them, we surpassed our goal by early afternoon and continued to set and surpass new goals throughout the day.

“Donors enthusiastically embraced the opportunity to support their favorite College or program and our students are the beneficiaries,” she added.

Conducted largely online, the 24-hour fundraising campaign used a crowdfunding platform combined with email marketing and a robust social media presence. Prizes and incentives rewarded “Social Ambassadors” who used tools on the CSU Giving Day website to promote the day online and raise funds through their own social networks. Donors who pledged “challenge gifts” helped maximize the impact of group efforts -- particularly among the University’s athletic teams, where men’s lacrosse and the swimming and diving teams each raised over $40,000 for scholarships and student-athlete support.

“Technology, social media, the creativity and energy of our ambassadors, and the willingness of donors to respond combined to shatter records and make this the biggest and best Giving Day ever at CSU,” said Julia Ross, director of annual giving and campaign operations.

In the five-year history of Giving Day, support for the University has increased by at least 50% each year, with this year’s performance more than doubling last year’s.