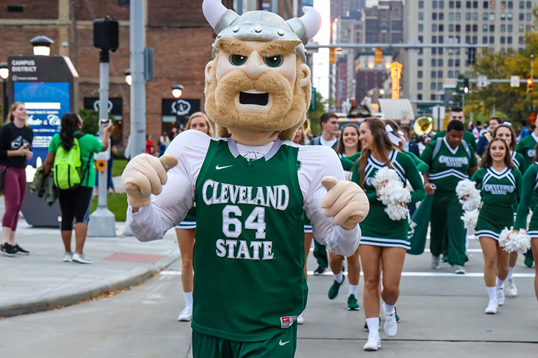 With all the recent press about the Cleveland Indians' new name, look, and likely mascot, we thought to revisit how the CSU mascot has changed through the years.

Poor Freddie the Fox (1). The old Fenn College mascot got the boot when his alma mater morphed into Cleveland State University in 1965. Following three days of voting, the student body settled on the Vikings nickname, which stands to this day.

Freddie the Fox was replaced by Viktorious Vike (2). Hägar the Horrible (3) assumed mascot duties in the 1980s, adopted from a comic-strip character created by Dik Browne. In 1997, a new mascot was introduced: Vike (4). He reigned for 10 years until CSU’s current mascot, Magnus (5), was introduced in 2007.